PKR falls to Rs217.66 per US Dollar in interbank market 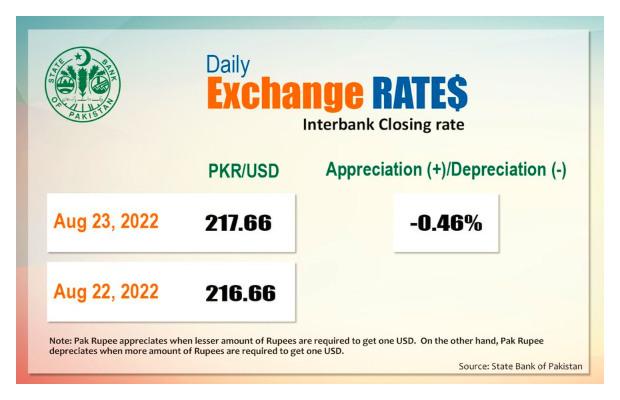 PKR falls to Rs217.66 per US Dollar in the interbank market, extending its losses for the second consecutive session on Tuesday,

According to the State Bank of Pakistan (SBP), the local currency closed down at Rs1.

The Pakistani Rupee has depreciated 0.46 percent.

According to analysts the latest fall in PRK value is due to the new rules imposed by the United Arab Emirates, smuggling, and the lifting of the import ban.

The UAE has made it mandatory for Pakistani travelers to declare 5,000 dirhams at the airport when landing.

This has led to an increase in the price of the US dollar in the open market.

Meanwhile, Economist and former adviser to the federal ministry of finance Dr. Khaqan Hassan Najeeb suggested that the Pakistani rupee is slipping not only because of the dollar’s global strengthening but also due to recent political developments, causing jitters in the market.

Keeping the market situation in view, many citizens are inclined to invest in cryptocurrencies such as Bitcoin, Swisscoin, OneCoin, and other virtual or digital currencies. The public is hereby advised to exercise extreme caution with respect to digital (cryptocurrencies) as a vehicle of investments.