The area has been cordoned off. 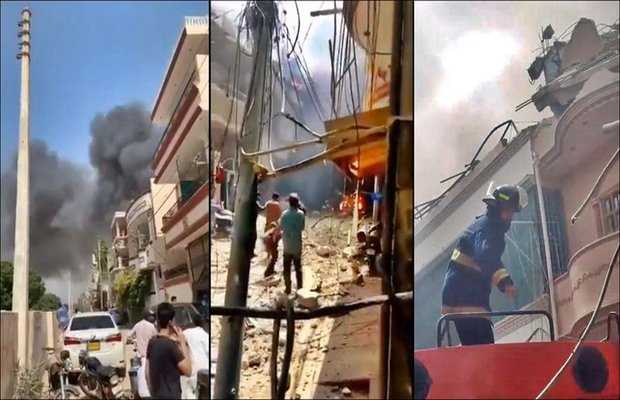 A rescue operation is underway in Karachi’s Model Colony locality where the PIA plane crashed.

The plane was scheduled to land at Jinnah International Airport when it developed some technical fault.

A few minutes before landing crashed at the locality near to the airport.

As being reported There are reports that at least five homes and some vehicles have been destroyed during the crash incident.

Meanwhile, the Civil Aviation Authority (CAA) has declared an emergency at the airport after the incident.

According to initial reports, a few dead bodies have been retrieved from the crash site while an injured girl and a woman have been shifted to Jinnah Hospital for treatment.

There is no confirmation of casualties yet, reports suggest a few survivors have been pulled out alive but injured.

PIA Chief Executive Officer Air Marshal Arshad Malik informed the pilot told the control room that there was a technical issue and he decided to go around rather than land even though two runways were ready for landing.

Last  minutes of conversation between Flight pilot and control tower is being circulated on social media:

The airplane made an earlier landing attempt aborted at 275 feet and climbed back to 3175 and finally last Mayday call before going down. Times here are UTC time. There was a problem onboard prior to both engine failures.

All times are UTC.

Screenshots show take off, go around and last signal. pic.twitter.com/tOXHXZSkNr

tweet
Share on FacebookShare on TwitterShare on PinterestShare on Reddit
Saman SiddiquiMay 22, 2020
the authorSaman Siddiqui
Saman Siddiqui, A freelance journalist with a Master’s Degree in Mass Communication and MS in Peace and Conflict Studies. Associated with the media industry since 2006. Experience in various capacities including Program Host, Researcher, News Producer, Documentary Making, Voice Over, Content Writing Copy Editing, and Blogging, and currently associated with OyeYeah since 2018, working as an Editor.
All posts bySaman Siddiqui