The video of the incident went viral on social media 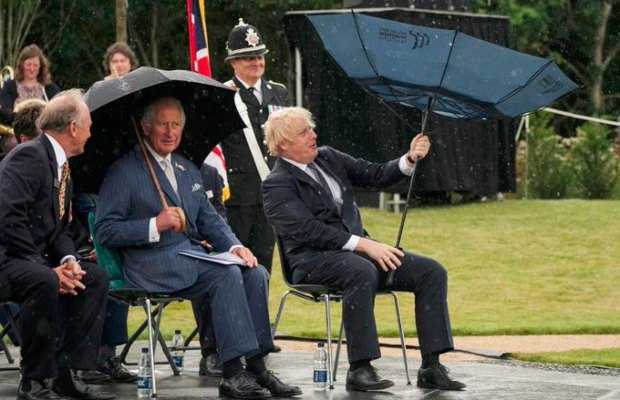 British Prime Minister Boris Johnson struggled to open his umbrella at an official engagement on Wednesday.

The video of the incident went viral on social media showing Boris Johnson struggling to handle his umbrella as it was blown inside-out by the wind.

Johnson was in central England attending the unveiling of a memorial to police officers who have died in the line of duty.

He was sitting alongside Prince Charles as he struggled to open up an umbrella, then offered it to interior minister Priti Patel before blustery conditions turned the umbrella inside-out.

The whole incident left the heir to the throne Prince Charles and the attendees in chuckles.

Boris Johnson having trouble with an umbrella. 🤦 pic.twitter.com/PEucA11M7z

The netizens were quick to respond to the situation as the British PM is not in the good books of the citizens over his handling of state affairs.

The incident also garnered criticism as for some it was ‘disgraceful’ for being a memorial service.

I presume that as HRH Prince Charles laughs at Johnson he does so on behalf of HM The Queen and the rest of the country. #borisbrollie #BorisJohnson #princecharles https://t.co/6MDqOtIwun

That's how I imagined the scene. #BorisJohnson #umbrella pic.twitter.com/jlUNQwdIyG

One of these men knows what they are doing. The other one was elected by the British public 🙄 pic.twitter.com/WhphtciySj