PM earlier said that the government will give eggs and chickens to rural women so they can start their own poultry business. 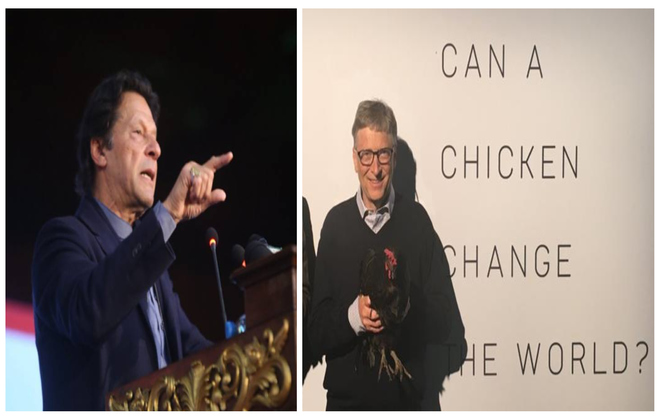 Prime Minister (PM) Imran Khan on Saturday has finally responded to criticism of his proposal to eradicate poverty from the country with the help of poultry.

He cited the poultry initiative ‎taken by Microsoft co-founder Bill Gates to silence the ongoing criticism on him for his ‘chicken formula’ to be implemented in Pakistan.

While sharing a news article on Bill Gates, PM took to social networking website Twitter, writing, “For the colonised minds, when ‎desis talk about chickens combating poverty they get mocked but when “walaitis” talk about desi ‎chicken and poverty it’s brilliance”.

For the colonised minds when desis talk about chickens combating poverty they get mocked, but when "walaitis" talk about desi chicken and poverty it's brilliance! https://t.co/bjvQQIVoRv

And after Imran Khan, his political party also tweeted in support of the premier’s plan and said, “Microsoft founder @BillGates launched a campaign to help extremely poor families in Africa by giving them chickens. However, when PM Imran Khan talks about it, it becomes an issue.”

“Propagandists really can’t rise above their hate!”, it added further.

However, when PM Imran Khan talks about it, it becomes an issue.
Propagandists really can't rise above their hate! https://t.co/9QiGwpCeAA

Earlier on Thursday, while addressing a ceremony to mark his government’s 100 days in office, PM Imran said that the government will give eggs and chickens to rural women so they can start their own poultry business.

He said , “The project has been tested and the government will provide injections to them for raising the chickens faster. This way they will have nutrient food for eating and more chickens and eggs to sell”.

It seems like Mr. Prime minister could not select the appropriate words to explain his point of view and the idea properly, since then it is being ridicule all over the social media and has been talk of town.

Those who are poking fun of @ImranKhanPTI for the chicken and egg theory of poverty alleviation should pause and read what Bill Gates has to say on the subject. https://t.co/BdKtTlTgz1

After listening to IK speech last evening, I am SHOCKED and concerned for our country. Eggs, Desi chicken, Kattas based economy at a time when fourth industrial revolution is on the horizon is a much too serious comedy. It shows what kind of agenda is being discussed in PM office

When you guys get some time after demolishing homes and shops of the poor people bring some Bill Gates chickens for them. #Chikenomics #Eggnomics

On the 100th day, a dollar could buy a dozen eggs. On the 101st day a dollar can buy 13 eggs. Bas bahut ho gaya bhai. Kitni aur tabdeeli aaya gi?

#BillGates wants to give the poor chickens. What they need is CASH. https://t.co/TGEzLmvgDN please read this and gain some information … #BISP is an ideal program , admit it and work on it instead of your bullshit speeches on injecting chickens #UselessPTI

Lol it’s great watching IK fanboys RT a 2016 article about Bill Gates’ Chicken poverty alleviation idea 😂 Someone tell these guys that Bill Gates himself has moved on from that idea and there are papers from business schools (top notch) explaining why this idea is unsustainable!

First u turns 'debate' died and was reactivated by a tweet. Now chicken and egg 'debate' was reignited again by a tweet. So in a parallel to modi and trumps' messaging strategy no matter what you do you end up discussing IK. And i think that may be an end in itself.

Imran Ismail is working on a new Chicken and Egg song for PTI, help him with the lyrics pls..

Although the criticism over the part of Imran Khan's speech which referred to poultry is totally over the top and is coming from people who don't understand the rural economy, this clip is just too funny to ignore. pic.twitter.com/sVuf4539Jq

Khan Saab, please go back to your speech and see how you sound. It has nothing to do with colonization and everything to do with just plain making sense & giving logical reasons for the stuff you’re saying. 🤦🏾‍♀️ https://t.co/Q7tybFKZPR

Yep. Poverty elevation programs using livestock started by him flopped. It's simple economics, if you give every other person chickens, the price of poultry falls and well….it's no longer a profitable business. https://t.co/lZGaGe69Ej

tweet
Share on FacebookShare on TwitterShare on PinterestShare on Reddit
Saman SiddiquiDecember 1, 2018
the authorSaman Siddiqui
Saman Siddiqui, A freelance journalist with a Master’s Degree in Mass Communication and MS in Peace and Conflict Studies. Associated with the media industry since 2006. Experience in various capacities including Program Host, Researcher, News Producer, Documentary Making, Voice Over, Content Writing Copy Editing, and Blogging, and currently associated with OyeYeah since 2018, working as an Editor.
All posts bySaman Siddiqui