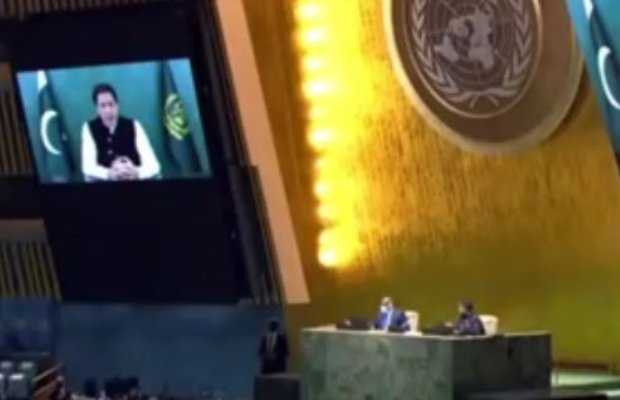 Speaking at the 76th session of the United Nations General Assembly, PM Khan said: “There is only one way to go. We must strengthen and stabilize the current government, for the sake of the people of Afghanistan.”

“India’s military build-up, development of advanced nuclear weapons, and acquisition of destabilizing conventional capabilities can erode mutual deterrence between the two countries,” he said, highlighting the growing Hindu extremism in India that has become a threat for its Muslim population and those belonging to other religious minorities.

“It is unfortunate, very unfortunate, that the world’s approach to violations of human rights lacks even-handedness, and even is selective. Geopolitical considerations, or corporate interests, commercial interests often compel major powers to overlook the transgressions of their ‘affiliated’ countries,” he maintained.

“We have unveiled a detailed dossier on gross and systematic violations of human rights by the Indian Security Forces in Occupied Jammu and Kashmir,” he added.

“Such double standards are the most glaring in case of India, where this RSS-BJP regime is being allowed to get away with human rights abuses with complete impunity,” he added and recalled the events surrounding the final rites of Kashmiri leader Syed Ali Shah Geelani, whose remains were forcibly taken away by the authorities and his family was denied a proper funeral and burial.

He demanded that Geelani’s mortal remains be allowed to be buried in the “cemetery of martyrs” with appropriate Islamic rites.

PM Imran Khan also urged the world to deal properly with Islamophobia. “I call on the secretary-general to convene a global dialogue on countering the rise of Islamophobia. Our parallel efforts, at the same time, should be to promote interfaith harmony, and they should continue,” he said.

He also urged the UN secretary-general to convene a summit in 2025 to review and accelerate the implementation of Sustainable Development Goals (SDGs).