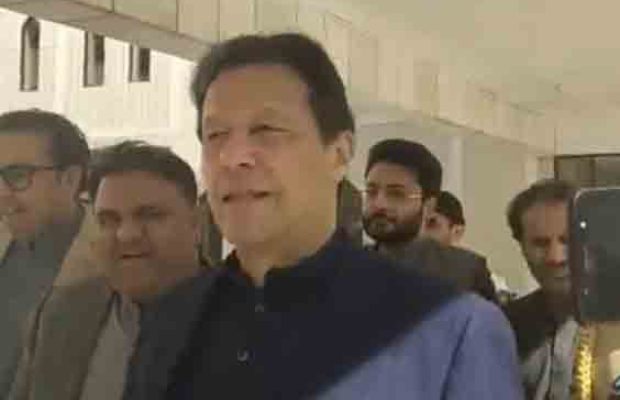 SC grilled Prime Minister Imran Khan over the government’s actions against those responsible for the Army Public School (APS) attack in 2014 and the ongoing talks with the Tehreek-i-Taliban Pakistan (TTP).

A three-judge bench.  headed by Chief Justice of Pakistan (JCP) Gulzar Ahmed, and comprising Justice Qazi Mohammad Amin Ahmed and Justice Ijazul Ahsan had summoned the prime minister in connection with the case around 10 am.

PTI was ruling in the Khyber Pakhtunkhwa when the APS massacre took place, PM said and added he rushed to Peshawar after the carnage.

The SC judges asked PM Imran Khan to stick to the matters related to the APS massacre when he informed that court about opposing to join the war against terror.

Justice Ahsan remarked that it was necessary to console the grieving parents. They want action against the high ups, responsible for the security gap, he added.

The PM requested the court to let him speak. He said he was summoned by the court and he appeared before it.

“Let me explain, Mr. Justice! We have lost more than 80,000 lives in terrorism,” the premier added.

Chief Justice Gulzar Ahmad cutting the PM short, remarked “we know all these things. Just enlighten the court what action was taken against the responsible persons.”

“You are our prime minister and respected for you,” the CJP bench said.

Justice Qazi Amin remarked that media reports are showing that the incumbent government is holding talks with the banned outfit TTP.

Justice Amin questioned whether “we are bringing them [TTP] back to the negotiating table instead of taking action against them?”

During the hearing, Justice Amin reminded the premier that Pakistan is not a small country. “We have the sixth largest army in the world,” he said.

“Are we going to surrender once again?” Justice Amin questioned the premier.

CJP Justice Gulzar Ahmed remarked that the court has nothing to do with the policy matters, why the culprits have not been identified despite the passage of several years.

Addressing the prime minister, CJP Gulzar said, “You are in power. The government is also yours. What did you do? You brought those guilty to the negotiating table.”

“The satisfaction of the parents [who lost their children in the APS attack] is necessary,” said Justice Ahsan addressing the premier.

The Supreme Court has ordered the government to prepare a report in cooperation with the relatives of the APS martyrs and submit it within four weeks. It asked that the government take positive and definitive action against the perpetrators of the terror act.

Six terrorists had stormed the Army Public School (APS) in Peshawar on Dec 16, 2014, and martyred around 150 students and teachers.

After the APS tragic incident, the government chalked out the National Action Plan (NAP) to eliminate terrorism from the country.