Heads of state from around the world are participating in the MGI Summit. 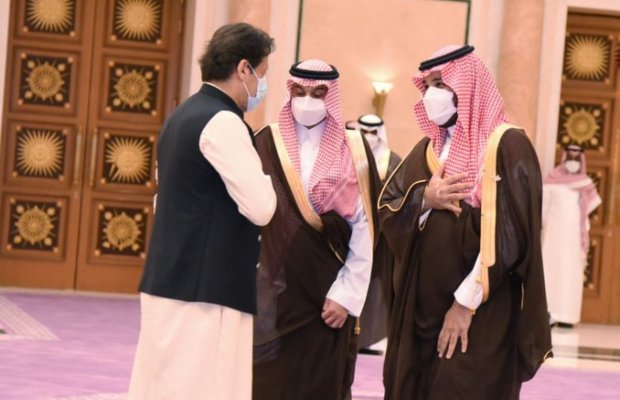 Also in attendance is John Kerry, the first Special Presidential Envoy for Climate for the United States.

Prime Minister Imran Khan was given a warm welcome by Muhammad bin Salman at the Middle East Green Initiative Summit.

He said that investment in climate mitigation in developing countries should be supported and technology sharing should be continued to tackle climate change.

PM Imran Khan shared his perspective with Sp Envoy on challenges faced by Pakistan & other developing countries due to climate change, highlighting Pakistan’s experience of launching nature-based solutions to address the environmental challenges, including the 10 BillionTreeTsunami project

Highlighting the priority attached by the government of Pakistan to Climate Change, the Prime Minister underscored the need to reinforce national as well as global emphasis against this existential threat.#APPNews pic.twitter.com/7s7rtbE8nl

Addressing the Pakistan-Saudi Investment Forum in Riyadh, the premier spoke about Pakistan’s growth potential and highlighted the country’s youth and strategic location.

PM Imran Khan also highlighted the need for improving ties with India but cheekily said that after Pakistan’s emphatic win against the latter in the T20 World Cup it was “not a good time” for such a conversation.

“We have two of the biggest markets in the world neighbouring us, through Afghanistan we have [access] to Central Asian markets.

“We have excellent relations with China, but if somehow we improve our relationship with India — I know after last night’s thrashing by the Pakistan team in the cricket match, it’s not a very good time to talk about improving relations with India,” PM Imran Khan said.