Syed Ali Geelani's family was not allowed to bury him and lodged an FIR against the family members. 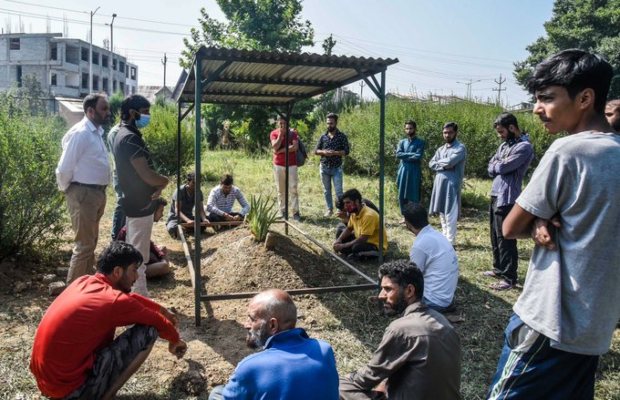 Indian authorities snatched Syed Ali Shah  Geelani’s body from his family who passed away on Wednesday and disallowed his burial to be held in accordance with his will.

Kashmiri Hurriyat leader Syed Ali Geelani was buried in a tightly controlled pre-dawn ceremony on Thursday morning. While a case was also registered against his family.

In a tweet, while sharing the link of an Indian news outlet, PM Imran Khan wrote: “Snatching the body of the 92-year-old Syed Ali Geelani, one of the most respected and principled Kashmiri leader, and then registering cases against his family is just another shameful example of India’s descent into fascism under the Nazi-inspired RSS-BJP govt.”

Snatching the body of the 92 year old Syed Ali Geelani, one of the most respected & principled Kashmiri ldrs, & then registering cases against his family is just another shameful example of India’s descent into fascism under the Nazi-inspired RSS-BJP govthttps://t.co/GUZswvIRwN

On the other hand, Federal Minister for Planning and Development Asad Umar said that Syed Ali Geelani, in his life, kept the candle of the freedom movement lit against the extremist Indian government.

Even after his death, the Indian government is afraid of the moral strength of his message, he added.

Naseem Geelani said the family had planned the burial at the main martyrs’ graveyard Srinagar as per his will but were disallowed by police.

“They snatched his body and forcibly buried him. Nobody from the family was present for his burial,” he said.

Geelani was buried in a local graveyard near his home in Hyderpora Srinagar in the wee hours on Thursday in a quiet funeral organized by authorities, amid tight security and restrictions with internet connectivity by and large snapped in Kashmir.

tweet
Share on FacebookShare on TwitterShare on PinterestShare on Reddit
Saman SiddiquiSeptember 5, 2021
the authorSaman Siddiqui
Saman Siddiqui, A freelance journalist with a Master’s Degree in Mass Communication and MS in Peace and Conflict Studies. Associated with the media industry since 2006. Experience in various capacities including Program Host, Researcher, News Producer, Documentary Making, Voice Over, Content Writing Copy Editing, and Blogging, and currently associated with OyeYeah since 2018, working as an Editor.
All posts bySaman Siddiqui