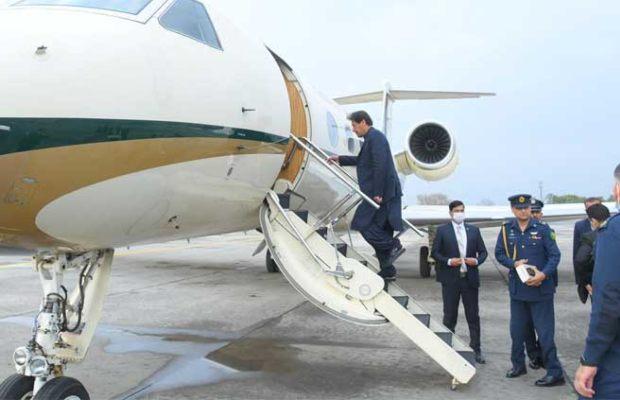 PM Imran Khan has departed for a two-day official visit to Russia on Wednesday.

The visit has been scheduled at the invitation of Russian President Vladimir Putin.

During the visit, PM Imran Khan will hold a one-on-one meeting with Russian President Vladimir Putin.

This is the first time since 1999 that a Pakistani prime minister will be visiting Russia.

The visit comes at a crucial time when the world is witnessing the Russia-Ukrain session in the region.

Earlier in the day, Prime Minister’s Office in a tweet notified that PM Imran Khan along with a high-level delegation including cabinet members will embark on a two-day official visit to Russia.

On invitation of Russian President Vladimir Putin (@KremlinRussia_E), Prime Minister @ImranKhanPTI, along with high-level delegation including the members of his cabinet, will embark on a two-day official visit to Russia today. 🇵🇰🇷🇺 pic.twitter.com/sU2yiogaC0

As being reported, a bilateral summit during PM Imran Khan’s visit is going to be the highlight.

A statement from the Foreign Ministry issued a day ago, said that “Pakistan and Russia enjoy friendly relations marked by mutual respect, trust, and convergence of views on a range of international and regional issues.”

It added that Putin and Khan “will review the entire array of bilateral relations including energy cooperation”, as well as unnamed regional and international issues

All eyes will be set on the two leaders’ meeting as much of the West has aligned against Putin amid increasing fears of a war in the region.

PM Imran Khan in an interview with Russia’s state-owned television network RT has expressed the resolution of the conflict between Russia and Ukraine through peaceful means.

PM Imran Khan gave the interview in Islamabad ahead of the planned visit.

“I am hoping that this Ukrainian crisis is resolved peacefully,” he said in the interview released by the outlet on Tuesday. He said he was not a believer in military conflict.

On the other hand, some foreign policy experts and local journalists have questioned the timing of PM Imran Khan’s visit to Russia.

The other risk is that Khan becomes a prop for Putin's propaganda, w/Putin using Khan's presence as an example to the world that Russia still has good friends after what happened. Putin may try to goad him into saying something re Ukraine. Hopefully Khan doesn't take the bait.

Terrible timing for PM Imran Khan visit to Russia. 190,000 Russian troops about to invade Ukraine. War can breakout any moment in Europe. What to do if Putin orders military invasion while PM still in Moscow. Putin didn't have good memories of Pakistan from Afghanistan invasion pic.twitter.com/X5X736aQeR

While many regard this visit of much importance:

PM Imran Khan's high powered visit to #Russia on 23-24 Feb comes at an interesting time. He will be accompanied by cabinet members as part of the delegation.
On agenda is:
-Energy Cooperation
-Regional Connectivity
-Islamophobia
-Afghanistan

The very visit itself is historic

The scaremongering over PM Khan’s visit to Russia is understandable—but relax: Pakistan will remain important in both the West & in Moscow/Beijing.

tweet
Share on FacebookShare on TwitterShare on PinterestShare on Reddit
Saman SiddiquiFebruary 23, 2022
the authorSaman Siddiqui
Saman Siddiqui, A freelance journalist with a Master’s Degree in Mass Communication and MS in Peace and Conflict Studies. Associated with the media industry since 2006. Experience in various capacities including Program Host, Researcher, News Producer, Documentary Making, Voice Over, Content Writing Copy Editing, and Blogging, and currently associated with OyeYeah since 2018, working as an Editor.
All posts bySaman Siddiqui