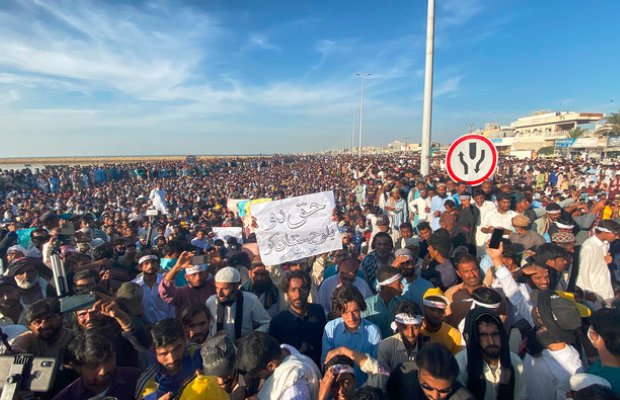 A statement from PM Imran Khan comes as the people of Gwadar have been out on the streets for more than a month.

It was two days ago when Gwadar saw one of its biggest protests as hundreds and thousands of men, women, and children, took to the streets, marching from the Seratun-Nabi Chowk, carrying placards and chanting slogans against the provincial government.

“I have taken notice of the very legitimate demands of the hardworking fishermen of Gwadar,” the premier said in a tweet,

“Will be taking strong action against illegal fishing by trawlers and will also speak to CM Balochistan,” he added.

I have taken notice of the very legitimate demands of the hardworking fishermen of Gwadar. Will be taking strong action against illegal fishing by trawlers & will also speak to CM Balochistan.

Led by Maulana Hidayat-ur-Rehman, Balochistan gen­­eral secretary of Ja­­m­a­at-i-Islami, the people of the port city launched the ‘Gwa­dar ko haq do’ movement 27 days ago.

tweet
Share on FacebookShare on TwitterShare on PinterestShare on Reddit
Saman SiddiquiDecember 12, 2021
the authorSaman Siddiqui
Saman Siddiqui, A freelance journalist with a Master’s Degree in Mass Communication and MS in Peace and Conflict Studies. Associated with the media industry since 2006. Experience in various capacities including Program Host, Researcher, News Producer, Documentary Making, Voice Over, Content Writing Copy Editing, and Blogging, and currently associated with OyeYeah since 2018, working as an Editor.
All posts bySaman Siddiqui