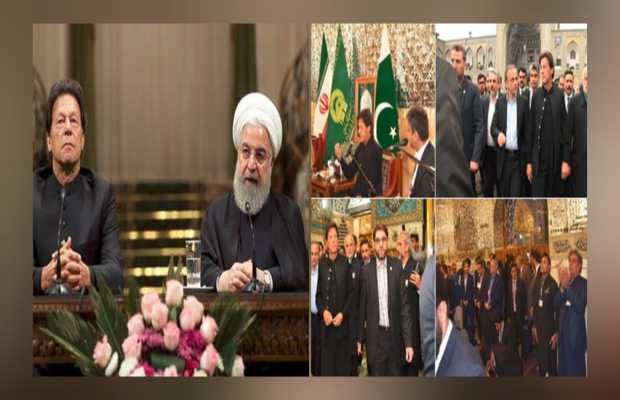 Pakistan and Iran have agreed to set up a Joint Rapid Reaction Force to guard the common borders. The understanding came at a meeting between Iranian President Hassan Rouhani and Prime Minister Imran Khan during talks.

Political leadership in #Pakistan has pledged that no militant group will be allowed to operate from Pakistan: Prime Minister @ImranKhanPTI @HassanRouhani #Tehran #PMImranKhan https://t.co/ykRPK73kJ9 … pic.twitter.com/oHGewgdM8B

Upon his arrival at the Sa’dabad Cultural-Historical Complex, PM Imran Khan was given a guard of honour. He was greeted by Iranian President Hassan Rouhani.

President Rouhani and Prime Minister Khan reviewed the honour guards and introduced their accompanying delegations to each other.

Prime Minister Imran Khan arrived in neighbouring Iran for bilateral talks, a day after Islamabad urged Tehran to act against armed groups behind the killings in Pakistan’s Baluchistan province earlier this week.

PM Imran Khan started his official two-day visit to Iran by paying his respects at the shrine of Imam Raza during a brief stopover in Mashhad, the northeastern holy Shia city of Mashhad on Sunday.

He also met the leadership of the Khorasan-i-Razavi province and told them that maintaining good relations with neighbours was the cornerstone of his government’s policy.

Prime Minister Imran Khan visits Shrine of Imam Raza at Mashhad and offers Fateha. He also prays for the progress, prosperity of the people and the country. pic.twitter.com/smEifQlbo7

This is PM’s first official visit to Iran on the invitation of Iranian President Rouhani since he took office last year.

According to the Iranian state TV, “During the meetings, improving bilateral ties, border security, countering terrorism and regional issues will be discussed”.

A statement by Pakistan’s foreign ministry said that the relations between the two countries are “marked by close historical and cultural linkages and strong people to people exchanges”.

“The prime minister’s visit to Iran will further strengthen the bilateral relationship between the two countries,” it added.

tweet
Share on FacebookShare on TwitterShare on PinterestShare on Reddit
Saman SiddiquiApril 22, 2019
the authorSaman Siddiqui
Saman Siddiqui, A freelance journalist with a Master’s Degree in Mass Communication and MS in Peace and Conflict Studies. Associated with the media industry since 2006. Experience in various capacities including Program Host, Researcher, News Producer, Documentary Making, Voice Over, Content Writing Copy Editing, and Blogging, and currently associated with OyeYeah since 2018, working as an Editor.
All posts bySaman Siddiqui