I want to see my nation to come out on Sunday evening & register a peaceful protest, he said 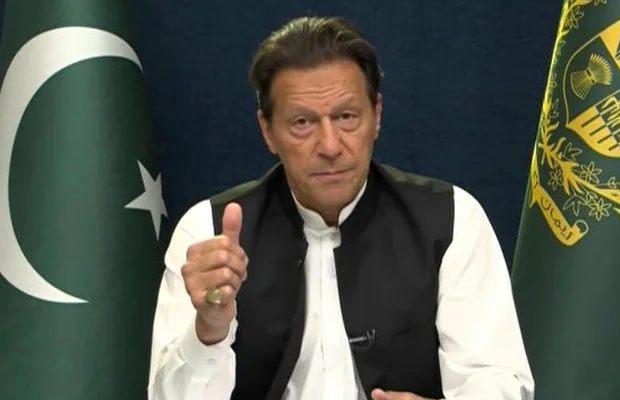 PM Imran Khan addresses the nation on Friday night, apparently his last as the premier of the country; Says he is disappointed but respects SC’s ruling but will not accept an imported government.

The Prime Minister said that he was disappointed with the decision of the supreme court, adding that he was also jailed during the independence movement of the judiciary.

Imran Khan said that NA Deputy Speaker Qasim Suri gave a ruling on a foreign conspiracy that was hatched to oust his government.

PM Imran Khan said that the apex court should have seen the letter regarding ‘foreign conspiracy to topple his government before giving Thursday’s decision.

“I respect the Supreme Court and the judiciary, but the apex court should have looked at the threat letter before issuing the verdict,” he said.

He said foreign powers want a pliable PM and that s why they are trying to get him out.

He termed the political situation in the country an attack on the sovereignty of Pakistan.

“The youth of Pakistan is our future and if they see leaders selling their conscience, what precedent are we setting for them?” he questioned, adding that even MNAs who came on reserved seats have become sellouts.

He went on to say that the open horse-trading and “buying and selling of consciences of lawmakers” was going on in the country.

“Every child knows the price at which consciences are being sold,” he added

“What kind of democracy is this? Which democracy in the world allows this? And the biggest forum for justice, the judiciary, we expected it to take suo motu action if nothing else.”

Recalling the time when he was arrested, the premier said that he strongly believes that the judiciary is the guardian of justice in the country.

My address to the Nation 🇵🇰 https://t.co/sa2L2BZxjv

The body language during the speech indicated that PM Imran Khan has accepted the fact that his tenure as the head of state is over.

As he urged his followers to come out on the streets after Isha prayers on Sunday and register a peaceful protest across the country.

“I shall seek support from my nation, I urge all to come out on Sunday evening to register a peaceful protest,” he said.

No-confidence motion against Imran Khan will be voted tomorrow, Saturday morning at the crucial NA session at 10:30 am.