The two sides discussed the entire spectrum of bilateral relations and ways and means to further expand their relations in different fields including trade, economy and tourism. 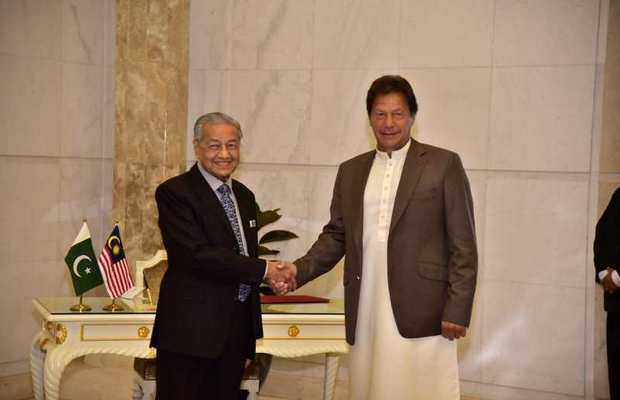 PM Imran Khan went to Monday, in a two-day official visit to the country on the invitation of the Malaysian prime minister.

During his visit, PM had a discussion Malaysian PM Mahathir Mohamad about the atrocities in Indian-administered Kashmir and the reasons for the Pakistani premier skipping the Kuala Lumpur conference in December 2019 during their meeting on Tuesday.

The two sides discussed the entire spectrum of bilateral relations and ways and means to further expand their relations in different fields including trade, economy, and tourism.

“Traditionally, Pakistan and Malaysia have been very close but the object of this trip is for us to becoming closer,” said PM Khan while addressing a joint press conference Tuesday morning. “There is a close affinity between the people of the two countries.

The premier added that he specifically wants to talk about the discussion he had with Mahathir over the situation in Indian-administered Kashmir. “A very radical and extremist government has taken over India. They have put the people in Kashmir in an open prison for the last six months.”

Kashmiri leaders have been put in jails and many teenagers have started disappearing. “I want to thank the Malaysian PM for standing with us and supporting us over this issue.”

The PM also spoke about the controversy surrounding his decision to skip the Kuala Lumpur Summit.

Addressing a joint press conference following talks with Malaysian Prime Minister Mahathir Mohamad in Putrajaya, Prime Minister Imran said: “I want to say how sad I was that I couldn’t attend the conference in Kuala Lumpur in the middle of December.

“Unfortunately, our friends, who are very close to Pakistan as well, felt that somehow the conference was going to divide the ummah. It was clearly a misconception because that was not the purpose of the conference as evident from when the conference took place.”

PM also said that he was “looking forward” to attending the conference because he felt that it is important that Muslim countries educate the West and other non-Muslim countries about Islam.

“All these misunderstandings, whether they are deliberate or whether they are by ignorance, […] it is important that we the Muslim countries, educate them about the real message of our Prophet Muhammad (PBUH).

“I also felt that we need a media, which we are working on, some sort of a joint effort that not only projects this… but also develop content for our young people about what really Islam is.”

Furthermore, there was a discussion regarding the import of palm oil:

Replying to a question about getting Pakistan to buy more palm oil from Malaysia, the Malaysian prime minister said that the two had discussed the sale of palm oil.

“I think Pakistan is quite ready to import more palm oil from Malaysia,” he said.

the Kashmir cause, Pakistan will do its best to compensate for that,” PM Imran Khan added.