While addressing launching ceremony Prime Minister said that “fighting and eradicating drug culture from Pakistan was not only the authorities' job but that of the society as a whole”. 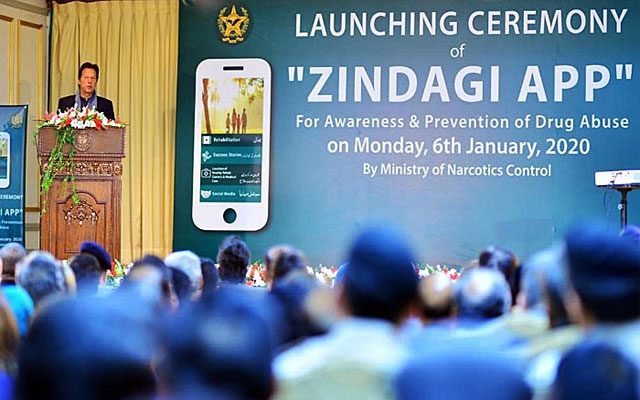 While addressing the launching ceremony of ‘Zindagi’ app, Prime Minister said that “fighting and eradicating drug culture from Pakistan was not only the authorities’ job but that of the society as a whole”.

“Unfortunately, mobile phones are doing more harm than good and due to them, child abuse and the usage of drugs have increased in our society.”

The PM said that the app aims to curb drug trafficking and spread awareness about the risk,”We need to tackle these issues on an emergency basis and the Zindagi app is a part of that process. It will help parents tackle the usage of drugs in their children in a efficient manner,” he said.

PM emphasized on how not only should the teachers play their part, the religious scholars should use Friday sermons to make people aware of this issue.

The PM noted that crystal methamphetamine — ice drug—  was becoming quite dominant in the society and the danger was not being undertaken the right way.

“Parents should keep a check on their children and understand that once their child is addicted to one drug, they will switch to another as well,” he warned.

The Prime Minister also discussed child pornography statistics of Pakistan, saying that he was “embarrassed” to hear that the country ranks high in the heinous crime.