The MQM-P is holding a rally in Karachi against the Sindh Local Government Act, 2021 passed by the Sindh Assembly 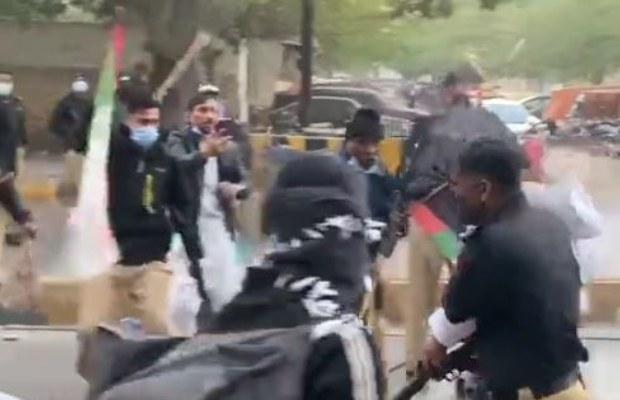 Police baton charges at the MQM-P rally in Karachi on Wednesday.

Several people were injured and many were taken into custody as the protesters reached Chief Minister House, where a sit-in is now being staged.

Things turned violent after police baton-charged at the Muttahida Qaumi Movement-Pakistan (MQM-P) workers protesting against the recently passed amendments to the Sindh Local Government Act of 2013 in front of the Chief Minister Sindh House in Karachi on Wednesday.

Shelling in the vicinity of Pearl Contiental – please avoid the area.@KhiTraffic#Karachi#Pakistan pic.twitter.com/z0gyEfoee7

Traffic disruption and congestion were anticipated on the rally route, however, the destination was changed by party leaders towards Chief Minister House.

The protesters forced their way through police barriers after marching along with the Share Faisal in a rally.
tweet
Share on FacebookShare on TwitterShare on PinterestShare on Reddit
Saman SiddiquiJanuary 26, 2022
the authorSaman Siddiqui
Saman Siddiqui, A freelance journalist with a Master’s Degree in Mass Communication and MS in Peace and Conflict Studies. Associated with the media industry since 2006. Experience in various capacities including Program Host, Researcher, News Producer, Documentary Making, Voice Over, Content Writing Copy Editing, and Blogging, and currently associated with OyeYeah since 2018, working as an Editor.
All posts bySaman Siddiqui