The FIR against the rioters was registered against under section 295,147 and 149 of the Pakistan Penal Code. 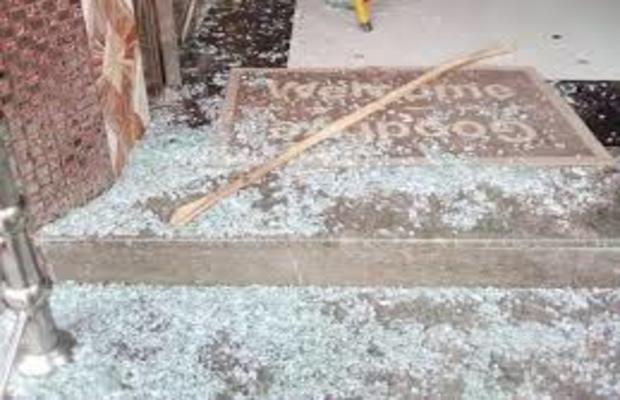 The police in Ghotki filed three cases against the rioters who vandalized a Hindu temple and ransacked school and businesses of Hindu community to protest against an alleged incident of blasphemy on Sunday in the town at northern Sindh.

According to police, all First Information Reports (FIR) have been registered in the district police station with the state as the complainant.

The FIR against the rioters was registered against under section 295 (injuring or defiling place of worship, with intent to insult the religion of any class), 147 (punishment for rioting) and 149 (every member of unlawful assembly guilty of the offense committed in prosecution of common object) of the Pakistan Penal Code.

According to the Additional Inspector General (AIG) Ahmed, under the section 295, forty-five people have been nominated in the FIR, out of which 22 people registered with their names while the rest 23 are unidentified.

Meanwhile, under section 149, one hundred and fifty people have been nominated—27 named and 123 unidentified persons for blocking roads. The third FIR pertaining to attacking temples, school, and looting businesses was filed against twenty-three people, out of which 11 are unidentified individuals, after the reports that protesters had looted multiple shops in Shahi Bazar.

Reports said the Police have asked the school administration to lodge a separate complaint against people who damaged the building and infrastructure so that a fourth FIR can be registered.

The police said, if the school’s administration is reluctant to act as complainant, it should inform the police so the case can be lodged on behalf of the state, the management was told.

The AIG said in response to a question that the principal of the school, allegedly involved in blasphemy, will be taken to court after the law and order situation has been restored.

The protests in Ghotki erupted on Saturday after an FIR against the school’s principal— who hails from a Hindu community— on the complaint of Abdul Aziz Rajpoot, a student’s father who has claimed that the principal of the school had committed blasphemy during a class on Saturday.

The suspect and his family fled after the incident sparked protests in the city resulting in a case registered against him on Saturday under Section 295-C of the PPC.

In the wake of the incident, religious groups and organizations called for a shutter-down strike.

All business centers in Ghotki remained closed on Sunday and large contingents of law enforcement agencies and paramilitary forces were deployed to control the situation.

The police said on Sunday, the principal was in the “safe custody” saying a fair investigation would be ensured after confirmation of the facts and justice will prevail.

Many of the locals, including political party leaders, arrived at the temple and sat in to guard the area. Photos and posts regarding the effort are being circulated on social media