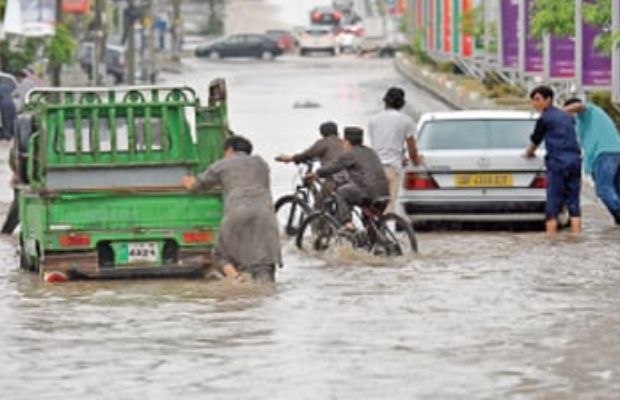 The pre-monsoon rains wreaked havoc in various parts of the country leaving at least 10 people dead in separate incidents.

Different parts of the country witnessed overnight downpours which submerged the houses and roads in the low-lying areas.

In Lahore, the wall of a house in Awan Market collapsed killing five members of a family.

At least five people were killed and three injured when a pickup truck was swept away in a flash flood flowing through the Beji stream in Balochistan’s Kohlu district on Sunday.

Parts of the Dera Bugti in Balochistan were also flooded overnight.

In Sindh, the pre-monsoon rains flooded 12 villages along Gharo Creek, leaving the hundreds of villagers stranded in the water.

On Saturday, the heavy rain lashed the twin cities of Rawalpindi and Islamabad inundating low-lying areas.

The Meteorological Department recorded 56 millimeters of rain at Shamsabad, 22mm at Chaklala in Rawalpindi, four mm at Zero Point, and 22mm at Bokra, 13mm at Golra, three mm at Saidpur and Islamabad International Airport in Islamabad.