Protests Against Jacob Blake’s Shooting Turn Violent in Kenosha US 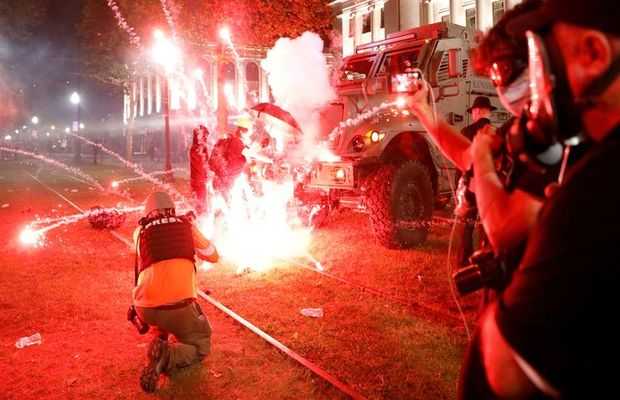 Soon after the shooting took place, protests once again erupted throughout US and in Kenosha as demonstrators demanded racial justice against police brutality. The demonstrations however turned violent as a few vehicles and a building was set alight by the mob; resulting in police resorting to teargas shelling to contain the crowd.

Alongside Kenosha, protests were also carried out in Floyd’s state Minneapolis as well in New York. “No justice, no peace” and “Say his name — Jacob Blake,” protesters said in Kenosha county.

“Yesterday, Jacob Blake was shot seven times in the back by police. His kids watched from the car. Today, we woke to grieve yet again. We need a full and transparent investigation,” Democratic presidential candidate Joe Biden issued a statement on the matter.

Jacob Blake was airlifted to Milwaukee in serious condition, but local media reported Monday afternoon that his family said he was out of surgery and improving, reported AFP.

“We will seek justice for Jacob Blake and for his family as we demand answers from the Kenosha Police Department,” said Civil rights attorney Benjamin Crump who also represents Floyd and other African-American victims of police’s racial violence.