The closing ceremony of the fourth edition of PSL will be held at Karachi’s National Stadium on 17th March. 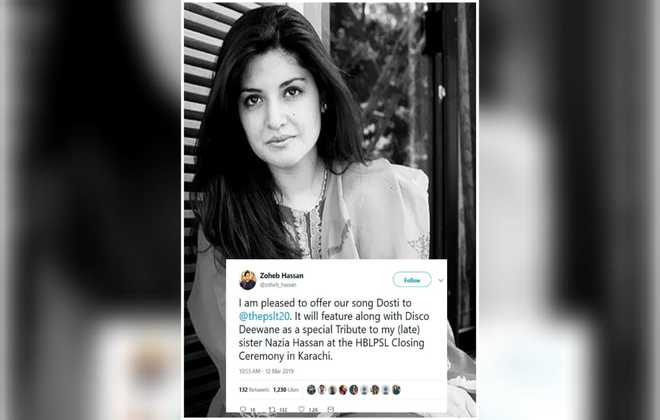 Some good news for Pakistani cricket and music fans. It seems like the strain between singer Zoheb Hassan and Pakistan Super League (PSL) have settled on good notes. As the singer has offered his late sister Nazia Hassan Hassan’s track ‘Dosti’ to the tournament with his full consent.

52-year-old Pakistani pop icon turned to Twitter to announce his decision of giving the rights of the 80’s super hit song ‘Dosti’ which he sang with his sister Nazia Hassan, adding that his late sister will also be paid accolades in the tournament’s closing ceremony.

Zoheb Hassan in a tweet wrote I am pleased to offer our song Dosti to @thepslt20. It will feature along with Disco Deewane as a special Tribute to my (late) sister Nazia Hassan at the HBLPSL Closing Ceremony in Karachi.
https://twitter.com/zoheb_hassan/status/1105527672304791554

Earlier at the start of the PSL, celebrity singer had slammed PSL for using his and Nazia Hassan’s track ‘Disco Deewane’ for the opening ceremony of its fourth season in the voice of Aima Baig, without his consent.

tweet
Share on FacebookShare on TwitterShare on PinterestShare on Reddit
Saman SiddiquiMarch 14, 2019
the authorSaman Siddiqui
Saman Siddiqui, A freelance journalist with a Master’s Degree in Mass Communication and MS in Peace and Conflict Studies. Associated with the media industry since 2006. Experience in various capacities including Program Host, Researcher, News Producer, Documentary Making, Voice Over, Content Writing Copy Editing, and Blogging, and currently associated with OyeYeah since 2018, working as an Editor.
All posts bySaman Siddiqui