Senate polls will be held on March 3. 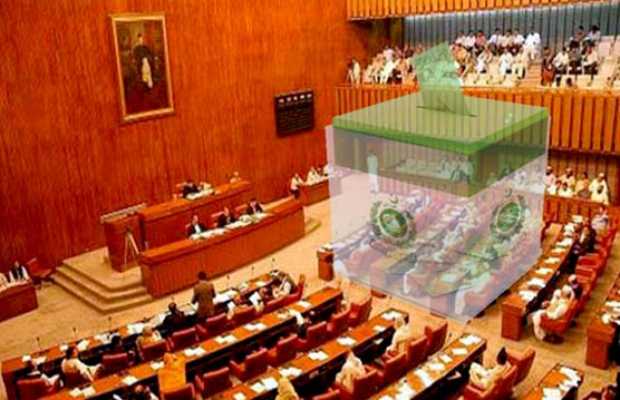 After the announcement of the Senate Election date, major political parties of the country have finalized their candidates.

After the announcement of the Senate Election schedule with polls to be held on March 3, the Election Commission of Pakistan ECP has started the process of receiving nomination papers for the Senate elections from today (Friday).

According to the schedule, the date for disposal of appeals is February 20 and the revised list of the contestants will be issued later on February 21. Furthermore, the candidates can use the option of withdrawal of candidature till February 22.

On Friday, Federal Minister for Science and Technology Fawad Chaudhry announced the names of PTI’s candidates for the Senate Election.

While announcing the candidates’ names, he added that that announcement regarding other seats would be made later on.

PTI’s contenders for senate include: Abdul Hafeez Sheikh and Fauzia Arshad have been finalized from Islamabad;

Faisal Vawda from Sindh and Abdul Qadir Baloch from Balochistan.

The Pakistan People’s Party (PPP) has finalized the candidates for the Senate election.

According to details, Sherry Rehman and Farooq H Naek will re-contest the election.

Saleem Mandviwala, Shahadat Awan, and Mirbaz Khaitran will also submit their nominations. Jam Mehtab Dehar and Sadiq Ali Memon will be candidates for the general seat.

While Khair-un-Nissa and Palosha Khan will be the party candidates for the seats reserved for women.

Karim Khawaja and Taj Haider will submit their papers for the technocrat seat.

As being reported, Rehman Malik and Islamuddin Sheikh are out of the senate election race.

Contrary to prior reports, Yousaf Raza Gillani has also decided not to contest for senate, as wants to contest the general election. It was reported earlier that Gillani will be PPP’s candidate for Speaker Senate.

The source quotes that the PPP leadership is trying to reconcile Yousaf Raza Gillani.

PML-N has also decided its party candidates for the Senate election scheduled to be held on March 3.

As being reported, Raja Zafarul Haq, Pervaiz Rasheed, and Muhammad Zubair will be the candidates from Punjab.

Furthermore, Sajid Mir, Azam Nazir Tarar, and Saira Afzal Tarar are also likely to get the tickets for the election.

Meanwhile, Jamiat Ulema-e-Islam has given the tickets to Maulana Abdul Ghafoor Haideri and Kamran Murtaza from Balochistan.

As being reported, JUI is also considering fielding joint candidates with the Balochistan National Party.

tweet
Share on FacebookShare on TwitterShare on PinterestShare on Reddit
Saman SiddiquiFebruary 12, 2021
the authorSaman Siddiqui
Saman Siddiqui, A freelance journalist with a Master’s Degree in Mass Communication and MS in Peace and Conflict Studies. Associated with the media industry since 2006. Experience in various capacities including Program Host, Researcher, News Producer, Documentary Making, Voice Over, Content Writing Copy Editing, and Blogging, and currently associated with OyeYeah since 2018, working as an Editor.
All posts bySaman Siddiqui