PTI’s Islamabad Jalsa: How many people showed up at the Parade Ground?

The Intelligence Bureau (IB) quoted that the number of people in attendance was 26,000. 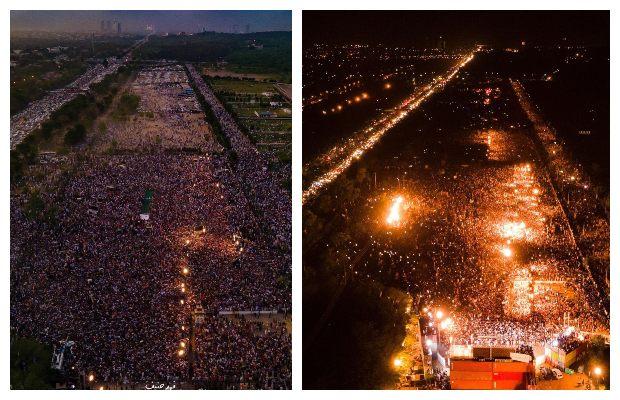 How many people showed up at the PTI’s Parade Ground Jalsa on March 27?

According to independent sources claim that about 3 to 4 lakh PTI supporters came to Islamabad to attend the Parade GroundJalsa and many people could not reach the venue due to traffic jams.

A day after the PTI Jalsa where PM Imran Khan intended to present the power show, the actual figures of the attendance have arrived.

Various sources are quoting a different number of people attending the PTI Jalsa.

The Intelligence Bureau (IB) quoted that the number of people in attendance was 26,000.

Meanwhile, an independent source claims that 35,000 PTI supporters had attended the rally, and insisted that the crowd was in no way near 10,0000.

The stage secretary claimed over two million people had gathered there.

A tweet from the PTI official handle quoted sources from cell phone data traffic analysis stating that the turnover of 0.6 to 0.8 million people in Islamabad at the time of Jalsa.

Info from some sources about cell phone data traffic indicating the potential size of the Jalsa! It was humongous! #IamImranKhan pic.twitter.com/sHNpiWnPtj

PM Imran Khan is reported to be pleased with the turnout of audiences at the PTI jalsa.

On the other hand, PML-N Spokesperson Marriyum Aurangzeb estimated it to be around 10,000.

tweet
Share on FacebookShare on TwitterShare on PinterestShare on Reddit
Saman SiddiquiMarch 28, 2022
the authorSaman Siddiqui
Saman Siddiqui, A freelance journalist with a Master’s Degree in Mass Communication and MS in Peace and Conflict Studies. Associated with the media industry since 2006. Experience in various capacities including Program Host, Researcher, News Producer, Documentary Making, Voice Over, Content Writing Copy Editing, and Blogging, and currently associated with OyeYeah since 2018, working as an Editor.
All posts bySaman Siddiqui