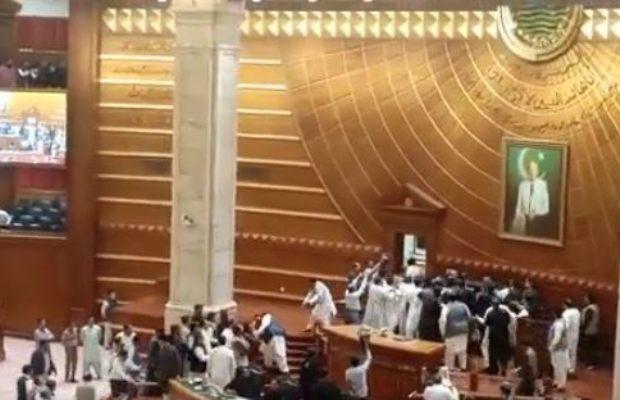 Today’s session is being convened to elect the new chief minister.

The PTI lawmakers caused a ruckus inside the assembly hall. They had brought “lotas” to the house.

As reported, the PTI lawmakers threw “lotas” at Deputy Speaker Mazari, attacked him, and pulled his hair despite the presence of security guards.

PTI  MNAs started chanting “lota, lota” (turncoats) as they lashed out at dissident PTI MPAs for parting ways with the party and decided to support the Opposition.

The video clips of the most embracing moment in the history of Pakistan politics are now doing rounds on social media.

Fighting in #PunjabAssembly is still going on during the session of electing new Chief Minister. Riot police force came to control the situation. Government is creating hurdles to not initiate the election of new CM as they lostajority in the house of 371 members. pic.twitter.com/gziaZTiwdI

Imagine this is happening in the month of Ramazan.#PunjabAssembly pic.twitter.com/bCof7xwQnG

PTI is the worst thing that happened to Pakistan and it's democracy. #PunjabAssembly pic.twitter.com/t8UxJxBicT

On the other hand, the National Assembly has passed a resolution strongly condemning physical and verbal attacks on Punjab Assembly’s Deputy Speaker Dost Muhammad Mazari by PTI and PML-Q members to sabotage process of election of the Punjab Chief Minister.

The resolution was moved by Shaza Fatima, voicing concerns over the security of the members of the provincial assembly and blatant violation of the constitution.

The resolution urged that law and order be restored and the process of the election of the chief minister of Punjab completed.

The resolution also demanded that those responsible for the incident be dealt with according to the law in order to prevent such actions in the future.

tweet
Share on FacebookShare on TwitterShare on PinterestShare on Reddit
Saman SiddiquiApril 16, 2022
the authorSaman Siddiqui
Saman Siddiqui, A freelance journalist with a Master’s Degree in Mass Communication and MS in Peace and Conflict Studies. Associated with the media industry since 2006. Experience in various capacities including Program Host, Researcher, News Producer, Documentary Making, Voice Over, Content Writing Copy Editing, and Blogging, and currently associated with OyeYeah since 2018, working as an Editor.
All posts bySaman Siddiqui