Punjab police bans use of camera phones in police stations

The moves comes a day after the Punjab IG issued a warning letter to senior police personnel over custodial deaths.

Punjab Police Inspector General Nawaz has forbidden officers below the rank of SHO from using video recording enabled smartphones inside police stations. This decision comes amid the growing number of video clips spreading on social media brings to notice about misconduct and brutality of Punjab Police.

Furthermore, citizens will also be not allowed to bring cellphones inside police stations and will be required to deposit them outside while entering the police station.

However, according to the new notification, lower-ranking officers will instead be allowed to use ordinary phones that do not have the video recording feature.

As being reported a meeting was held by Rawalpindi CPO Faisal Rana with other police officers, after which written instructions were forwarded to the relevant officers against illegally detaining citizens and torturing them.

The new instructions were issued on the use of mobile phones by lower-ranked officers while recording and uploading videos of on-duty officers has been also ‘strictly forbidden’. 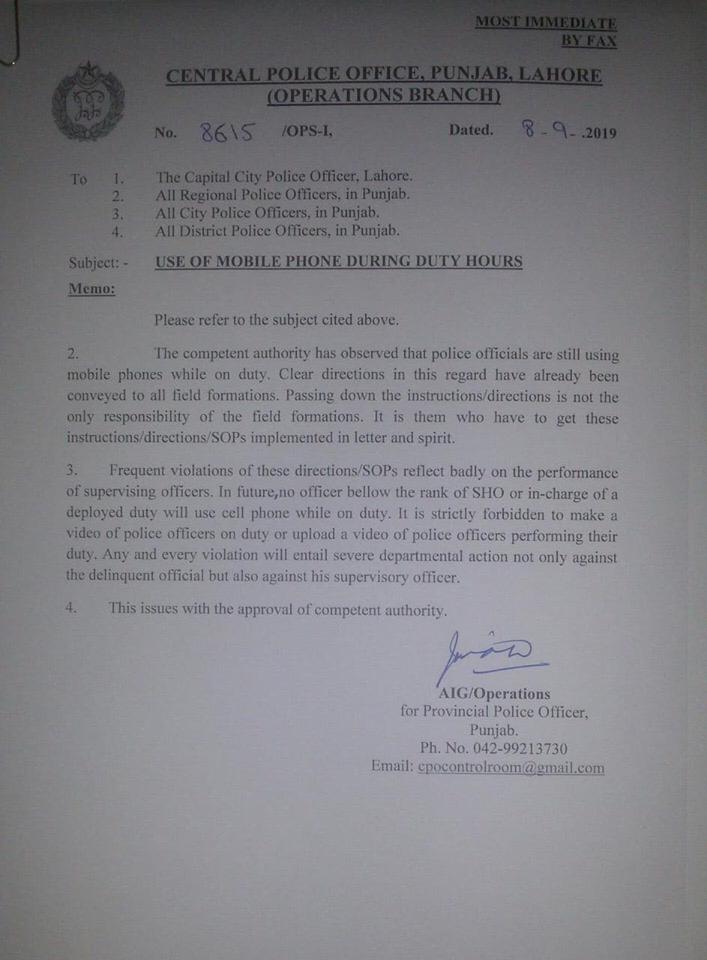 IG Punjab has expressed extreme annoyance over the deaths in police custody. He also showed his dismay over the arbitrary discontinuation of the monitoring of police stations through closed-circuit television (CCTV) cameras by district and police officials.

A zero-tolerance policy is enforced on the monitoring of lock-ups, SHO rooms and front desks at police stations, according to the letter issued to regional and district police officials. IG Punjab has added that despite this, the operation of CCTV cameras was suspended.

Police man arrested for misbehaving with elderly woman, after video of the incident was shared on social media

IG Punjab has further expressed that the recent deaths and maltreatment in police custody indicated the irresponsible behaviour of field and senior police officials.

The police chief has warned that DPOs, SPs, SDPOs, and supervisory officers would be held responsible if any such case surfaced again in the future. He asserted that all related officials would undergo a departmental inquiry.