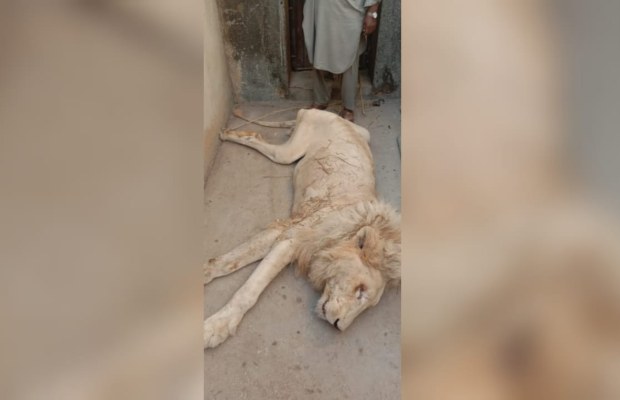 A rare white lion at Karachi Zoo died on Wednesday!

It has been a few days that the news of starving rare white African lion at the Karachi zoo made headlines.

However, the lion died at the zoo on Wednesday reportedly after lung failure.

The lion was around 14 to 15 years old and was brought to Karachi Zoo from Africa in 2012.

According to the zoo authorities, the lion had been ill for the past 13 days after suffering from tuberculosis.

Karachi Metropolitan Corporation (KMC) spokesperson confirming the death of the lion said that it had been suffering from pulmonary tuberculosis and was ill for the past 13 days.

“He was being treated by veterinarians but could not recover and died due to his illness at 11 am on Wednesday,” the spokesperson said.

“Team of veterinarians had performed an autopsy on the lion’s body and concluded that the animal also had pneumonia and his lungs had stopped working,” he added.

The social media of the country had been in an uproar ever since the video of fragile starving lion and other animals were shared on various platforms.

However, in response to the outcry on social media, the KMC maintained that all animals at Karachi Zoo were healthy and being provided proper feed.

We have no right to zoos if this is how we treat animals….Karachi Zoo fails to pay food suppliers….The animals are already in awful shape.
Let's shut down all zoos @anikasleem @FOURPAWSUSA shame on #KarachiZoo pic.twitter.com/EAeh62hxaL

A rare white African Lion dies in Karachi Zoo, age 15. What a majestic creature we lost due to poor management of Karachi Zoo and Government! White Lion was suffering from tuberculosis for 12 days..Management is responsible for all deaths occurring on regular basis!#KarachiZoo pic.twitter.com/Z07EwzT8YQ

Today,looking at this picture,I remembered once I said to my teacher, Sir,I have to work for the rights of animals."my teacher said,Here humans don't get rights. You want to work for animal rights.Surely Allah will hold us accountable for what we do with the animals #karachizoo pic.twitter.com/T7BCSvK2nF

these merciless robbers of PPP won't spare even animals
they have no fear whatsoever of law or God#KarachiZoo pic.twitter.com/DYWOe8jSsT

On the other hand, Karachi Administrator Barrister Murtaza Wahab has sought a report on the lion’s death.

Expressing grief over the incident, Wahab pointed out that white lions were a rare breed, he added that “strict disciplinary action will be taken against the zoo management if any negligence is found after the cause of the lion’s death comes to light.”