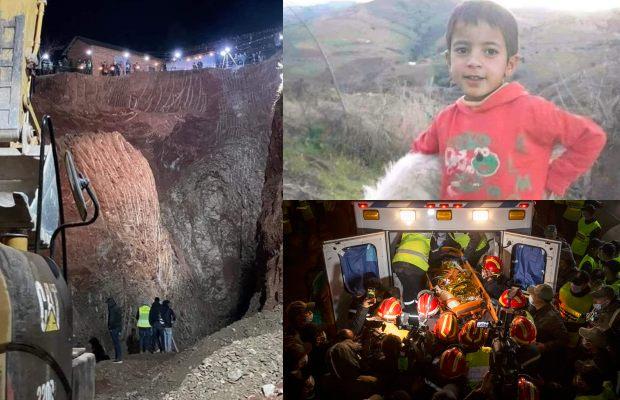 A tragic ending to a short story of hope, whose hero is a child who touched the hearts of millions around the world.

After fighting for 5 days inside a cold, dark, and deep well, five-year-old  Rayan passed away minutes after being rescued on Sunday.

The world saw the hashtag #SaveRayan trending with prayers and wishes for the young one as rescue efforts continued to save the little boy.

However, the footage showing the little Rayan’s body wrapped in a yellow blanket after having been retrieved through a tunnel dug for the rescue broke millions the heart across the globe.

An initial medical examination of the boy’s body showed a brain and lung injury and multiple fractures in the neck and spine.

Rayan Awram fell into a 32-meter deep well in Chefchaouen on Tuesday as his father was repairing the well.

He told local media the following day that his son had fallen down the shaft at “that one moment I took my eyes off him”, adding: “I haven’t slept a wink.”

Not just the Ruler of Morocco but the international leaders have also extended their condolences to Rayan’s family and the people of the country.

“Following the tragic accident which cost the life of the child, Rayan Oram, His Majesty King Mohammed VI called the parents of the boy who died after falling down the well,” a statement from the royal court said.

French President Emmanuel Macron extended his condolences to the family.

“Tonight, I want to tell the family of little Rayan and the Moroccan people that we share their pain,” he said.

“Our sincere condolences and sympathy to the family of the child Rayan and to the brotherly Moroccan nation and to all humanity that grieved for his loss,” Sheikh Mohammed said on Twitter.

On social media hashtag #SaveRayan, had been trending across the country and around the world, and after the announcement of successful rescue expressed their jubilation.

But this turned to heartbreak minutes later when the official statement arrived announcing that Rayan passed away.

Finally! The moment we all have been waiting. The Moroccan rescue team has successfully rescued little #Rayan from the well where he has been stuck for the past five days.

I believe Allah will save Rayan, all Islamic nation pray for him 🙏🏻❤️#أنقذوا_ريان pic.twitter.com/qOhe747KIW

“Rayan’s courage will stay in our memories and continue to inspire us,” AC Milan’s Algerian midfielder Ismael Bennacer tweeted.

Condolences  Pour in For Little Rayan on social media:

Rest in Peace Rayan.
Sending love and prayers to Rayan, all of his family and friends, the rescue workers and the people of Morocco.#Rayan #Morocco pic.twitter.com/6dzvlQVQSG

Just 5 minutes, she was happy for 5 minutes. Her son passed away and moved to His Creator. You are the bravest mom in the whole world. Your tears describe every thing. We will pray for him.
Don't worry, he is safe now. He is in a better place more comfortable place.#ريان #Rayan pic.twitter.com/owIIsTDI4t

He unified the humanity and then left. In moments of joy and sadness,he showed us that regardless of our creed or ethnicity,we will stand together. RIP #Rayan. Our thoughts &prayers R with his loved ones(family,Morocco,the world). U may be gone but U will never be forgotten#ريان pic.twitter.com/pfM6TQ3mPL

A tragic ending to a short story of hope, whose hero is child who has touched the hearts of millions around the world.

After fighting for 5 days inside a cold, dark and deep well #Rayan passed away minutes after being rescued🥺💔
May Allah bless his soul#SaveRayan #الطفل_ريان pic.twitter.com/QPrbPAoGU8