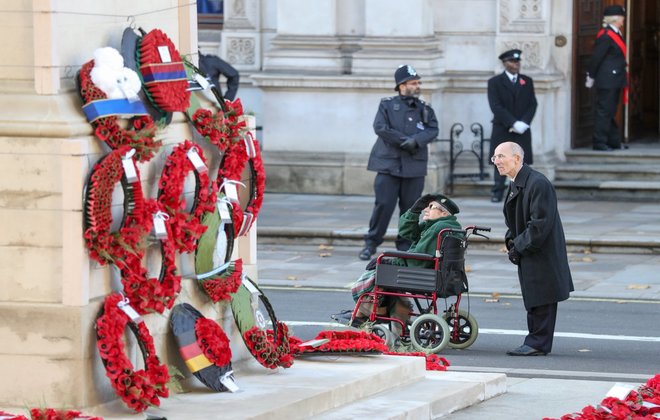 11th November 2018, marks the 100th anniversary of the end of First World War, Armistice. It is the day commemorated every year on 11 November to mark the armistice signed between the Allies of World War I and Germany at Compiègne, France, for the cessation of hostilities on the Western Front of World War I. The Armistice took effect at eleven o’clock in the morning, the “eleventh hour of the eleventh day of the eleventh month” of 1918. Marking the end of four years of war and a victory for the Allies.

One of the main event was held in Paris, France. Over 100 world leaders and dignitaries walked towards the Arc de Triomphe to stand before the grave of the unknown soldier.

French President Emmanuel Macron and German Chancellor Angela Merkel during a French-German ceremony in the clearing of Rethondes (the Glade of the Armistice) in Compiegne
📷Philippe Wojazer pic.twitter.com/sO8ekZllNv

70 leaders of Allied countries walk down Champ-Elysees to commemorate the cease-fire that ended The Great War. #ArmisticeDay100 ceremonies mark the 100th anniversary of that moment.

That America & Russia were absent from this symbolic act is a terrifying warning. pic.twitter.com/reX2EFeHa0

French President Emmanuel Macron has warned that a gathering of global leaders in Paris could be “a picture of a last moment of unity before the world goes down in new disorder”.

He also, indirectly hit the American president for his ‘America First’ slogan. French president said, “Patriotism is the exact opposite of nationalism. Nationalism is a betrayal of patriotism.”

WATCH: “Nationalism is a betrayal of patriotism,” French President Macron said in a speech just steps from President Trump, coming on the heels of the U.S. president declaring himself a “nationalist.” https://t.co/TmIIfk8QHk pic.twitter.com/mBWv4kxxZ7

Prince Charles led U.K in the day of remembrance, laying a wreath on behalf of his mother, Queen Elizabeth. While the Queen watched the ceremony at the Cenotaph Memorial in London from the balcony of Britain’s foreign ministry.

Britain’s royal family was joined by German President Frank-Walter Steinmeier on Sunday to remember those killed and wounded in conflict. Millions fell silent for two minutes to mark 100 years since the end of World War One.

The traditional Remembrance Sunday service included the laying of wreaths by other members of the royal family, politicians and the armed forces. It was followed by a “people’s procession”, with 10,000 people expected to stream past the Cenotaph in honour of the war dead.

The Duke of Cambridge, The Duke of Sussex, @thedukeofyork, The Earl of Wessex, The Princess Royal, The Duke of Kent and Prince Michael of Kent all laid Wreaths at the Cenotaph. The Duke of Edinburgh’s was laid by his Equerry – a Captain in the Grenadier Guards. pic.twitter.com/pBdQY1v83L

The Prince of Wales, on behalf of The Queen, laid the first wreath at the Cenotaph. #LestWeForget #WeWillRememberThem pic.twitter.com/nDiWqweSM9

— The Duke and Duchess of Cambridge (@KensingtonRoyal) November 11, 2018

The Duchess of Cornwall joined The Queen and The Duchess of Cambridge on the balcony of the Foreign and Commonwealth Office to watch the #RemembranceSunday Service. pic.twitter.com/sKd9OZ5jIe

— The Prince of Wales and The Duchess of Cornwall (@ClarenceHouse) November 11, 2018

Remembrance Day services were also held in India. Near about 1.5 million Indian soldiers fought for the UK in the First World War, including Muslims.

This morning in Paris, 100 years after the WWI Armistice, leaders from around the world came together to remember the fallen, and pay tribute to their sacrifice. Today, we commit to preserving their legacy of peace & freedom. pic.twitter.com/AV5dYKuF9M

Today, we remember every Canadian who has sacrificed their future for generations beyond their own – we are free because of them. #CanadaRemembershttps://t.co/rIFL57IxEj pic.twitter.com/kqeAFRg14i

At 11am on #RemembranceSunday we fall silent to remember the sacrifices made by those who fought and continue to fight for their country.
This year marks 100 years since the end of WWI, today we remember the hundreds of thousands of lives lost between 1914-1918. #ArmisticeDay100 pic.twitter.com/sNfa0DJacX

I’m in England now and honoring their Remembrance Day — while my heart is back home honoring our own men and women warriors of our U.S. military on Veteran’s Day.
Me and my fellow crew… https://t.co/9rX7oK2Oh7

We should never forget the sacrifices made by all soldiers for our freedoms in Europe.

Walter Tull, British Army's first black officer who served in WW1, is one of the faces remembered in the sand on one of the 32 beaches around Great Britain. #LestWeForget #ArmisticeDay100 pic.twitter.com/eSebOQef4R

100 years on, not only do we remember the individual sacrifices of ALL our fallen heroes who served in the World Wars, but also the 83,005 Sikh soldiers who lost their lives and a further 109,045 injured in the two world wars.#LestWeForget #RemembranceDay2018 #ArmisticeDay100 pic.twitter.com/s4NMQClTLg

tweet
Share on FacebookShare on TwitterShare on PinterestShare on Reddit
Saman SiddiquiNovember 12, 2018
the authorSaman Siddiqui
Saman Siddiqui, A freelance journalist with a Master’s Degree in Mass Communication and MS in Peace and Conflict Studies. Associated with the media industry since 2006. Experience in various capacities including Program Host, Researcher, News Producer, Documentary Making, Voice Over, Content Writing Copy Editing, and Blogging, and currently associated with OyeYeah since 2018, working as an Editor.
All posts bySaman Siddiqui