Pakistan had suspended flights to China on January 31, a day after the World Health Organization declared the outbreak as a global health emergency. 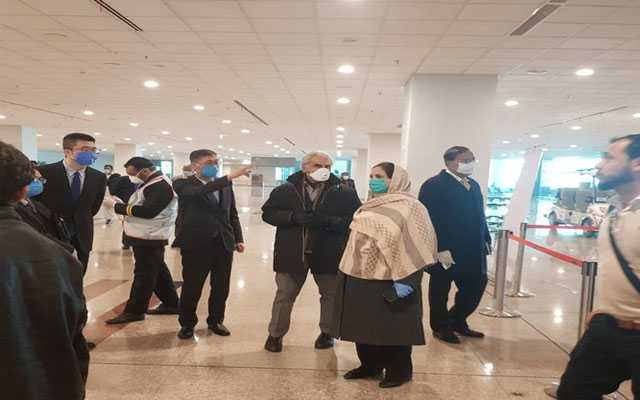 Pakistanis stranded in China reached Islamabad on Monday as the government has resumed its flight operations to the neighboring country where the deadly coronavirus outbreak has killed 361 people.

201/ At Islamabad airport this morning – received passengers from China along with HE Chinese Ambassador in 🇵🇰 CZ6007 brought 69 passengers including 57 Pakistanis and 12 Chinese. We supervised implementation of “Airport SOPs” & I interviewed passengers. pic.twitter.com/22GleZfmUa

The SAPM taking to Twitter wrote, “We supervised the implementation of ‘Airport SOPs’ and I interviewed passengers.”

Pakistan had suspended flights to China on January 31, a day after the World Health Organization declared the outbreak as a global health emergency.

Earlier in the day, the first flight carrying 40 students reached Islamabad airport where the national health department staff conducted medical examinations of all the students after which they were permitted to go home.

Later in the day, a China Southern Airlines flight CZ6007 brought 69 more passengers which included members of a group of Pakistani students and community members stranded in Urumqi due to the suspension of flights in the wake of the outbreak.

They Pakistanis stranded in Urumqi were earlier granted an 11-day visa extension by Chinese authorities.

Dr. Mirza, before the flights’ arrivals, had reviewed the arrangements for screening passengers at the airport.

The aviation officials in a statement said the checkup for coronavirus was properly conducted at the airport.

“At all airports, screening systems have been strengthened. The Pakistani government is prepared for any emergency situation,” Mirza said, adding: “The health department has the facilities for detecting coronavirus cases.

“At all airports, comprehensive screening arrangements are available.”

The death toll from the new coronavirus in China has increased to 361 on Monday, exceeding the 349 mainland fatalities from the 2002-3 SARS outbreak.

The virus has since spread to more than 24 countries, including India, Sri Lanka and Nepal in South Asia.

The government has confirmed that the seven suspected coronavirus cases in Pakistan have tested negative.