The efforts were temporarily halted late on Thursday night due to poor light availability, but were soon resumed with the help of streetlights, generators and searchlights. 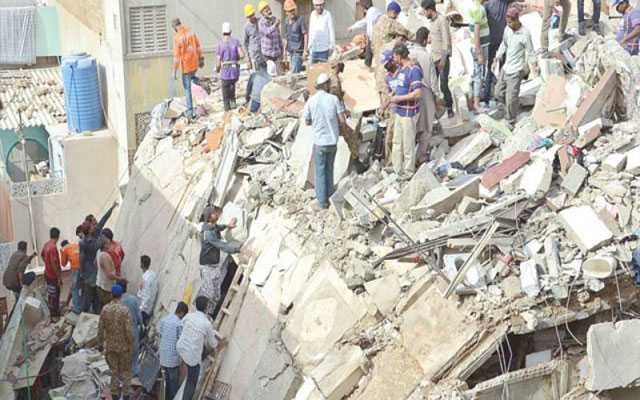 Several more bodies recovered from the debris of the Rizvia Society’s residential building that collapsed on Thursday.

According to the reports, the death toll from the tragedy rose to 17, while 32 others were injured, rescue services reported.

The collapsed building of the society left the adjoining building bent and it is feared that it may also collapse, while several parts of a third building have also collapsed, the building lies fouth in line has been declared ‘dangerous.’

The efforts were temporarily halted late on Thursday night due to poor light availability but were soon resumed with the help of streetlights, generators, and searchlights.

The casualties on the unfortunate event include four children, as well as eight women and four men. Between late Thursday night and Friday evening, three bodies, identified as Farrukh Usman, 35, his one-year-old son Hassan, and his sister-in-law, Noreen, were retrieved.

Several injured have been discharged from the hospital after receiving first aid. However, three people are still undergoing treatment at Abbasi Shaheed Hospital (ASH).

Amongst the casualties, 9 people, including four members of a single-family, were laid to rest after funeral prayers on Friday.