#RIPIrrfanKhan: Celebs across India, Pakistan mourn the untimely passing of the legendary actor

Irrfan Khan had been battling neuroendocrine tumour for two years. 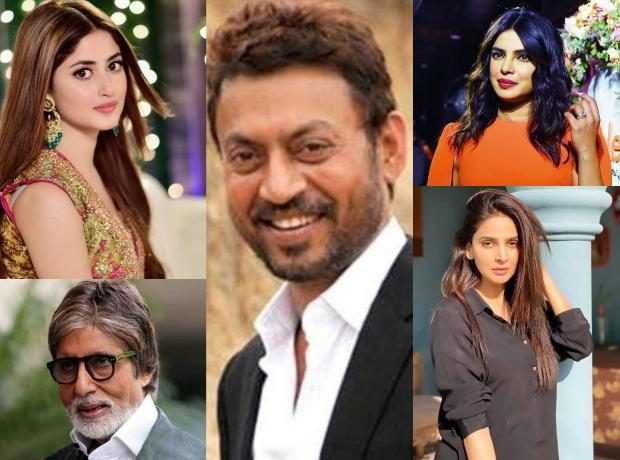 Bollywood A-lister Irrfan Khan’s sudden and untimely death has left members of the showbiz fraternity dismayed not just in India but also across the border, where he was deeply admired for his unparalleled acting skills by millions.

The legendary actor breathed his last in Mumbai after a long battle with a rare form of cancer, for which he was diagnosed in 2018.

Soon after the news of his death broke, many Indian and Pakistani celebs took to social media to share their condolences and paid him tribute.

Here’s what they had to say about the iconic star who they feel has  left the world too soon:

Veteran actor Amitabh Bacchan was deeply saddened to hear the news and called him a prolific contributor the world of cinema.

T 3516 – .. just getting news of the passing of Irfaan Khan .. this is a most disturbing and sad news .. 🙏
An incredible talent .. a gracious colleague .. a prolific contributor to the World of Cinema .. left us too soon .. creating a huge vacuum ..
Prayers and duas 🙏

Big loss to the film industry, his fans, all of us n specially his family. My heart goes out to his family. May God give them strength.
Rest in peace brother u shall always be missed n be in all our hearts.. pic.twitter.com/KFQ1RoC1H8

With a heavy heart I post this tweet . A phenomenal actor , such an inspiration his performances have been for me . He battled for his life but sadly leaves us today . RIP Irrfan Khan . OM Shanti 🙏

Raveena Tandon tweeted that she was deeply moved at the loss of a beautiful human being who can never be replaced.

A fantastic costar, an actor par excellence ,and a beautiful human being , you are irreplaceable #irrfankhan. ⁦@irrfank⁩ We lost you too soon! Unbelievable. Om Shanti 🙏🏻 pic.twitter.com/QdEBiSUegw

The charisma you brought to everything you did was pure magic. Your talent forged the way for so many in so many avenues.. You inspired so many of us. #IrrfanKhan you will truly be missed. Condolences to the family. pic.twitter.com/vjhd5aoFhc

Veteran actor  Anupam Kher held Khan as a dear friend, one of the finest actors and a wonderful human being.

Nothing can be more heartbreaking and tragic than the news of passing away of a dear friend, one of the finest actors and a wonderful human being #IrrfanKhan. Saddest day!! May his soul rest in peace. #OmShanti 🙏 pic.twitter.com/QSm05p7PfU

Sonam Kapoor recounted the times when Khan helped him overcome her lack of confidence.

Rest in peace @irrfank you have no idea what your kindness meant to me at a time I was at my least confident . My condolences to your family and loved ones.

Pakistani actress Saba Qamar, who made her Bollywood alongside Khan in 2017’s Hindi Medium, could just not grasp the death news of her mentor.

#RIP .. a sad news indeed , my prayers for his final journey .may his soul rest in peace ..may ALLAH grant him jannah..and give his family sabar..A fine actor Who’s work will be remembered by the generations to come .♥️🙏🏼 pic.twitter.com/siRwLqrQJv

Sajal Aly, who made her Bollywood debut with Sridevi, shared a picture of Khan on her Instagram while praising his work in the caption.

Rest in peace the legend Irfan Khan!! You will surely be missed forever..Since art has no boundaries ,we can feel the pain and are equally grieved by your sudden demise…May Allah bless the departed soul. Undoubtedly, we all belong to Allah all mighty and have to return to HIM. pic.twitter.com/WFlq9LnPt4

RIP #Irfankhan Your loss will leave a vacuum in the field of acting which is difficult to fill.