According to the spokesperson the meetings of the zonal committees will take place at the provincial headquarters. 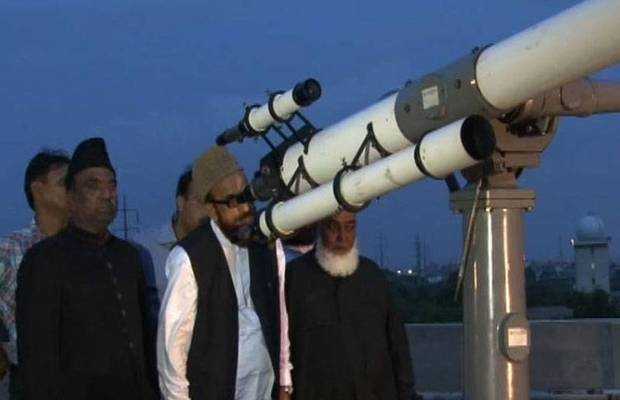 Ruet-e-Hilal Committee will meet on Thursday to sight the moon for Ramazan this year.

Committee Chairman Mufti Muneebur Rehman will preside over the meeting being held at the Met Office in Karachi.

According to the spokesperson the meetings of the zonal committees will take place at the provincial headquarters.

While the Islamabad’s zonal committee will hold a meeting at the Kohsar complex.

It is for the first time in the history of Pakistan that the science ministry had been given representation in the Ruet-i-Hilal Committee.

The ministry’s Joint Secretary Dr. Tariq Masood was appointed as a member of technical support a day earlier.

“This is a step in the right direction. Religious events and holidays should be a reason for unity instead of division between the people. On this positive note, we must progress,” Chaudhry had tweeted.

The possibility of sighting the moon in Khyber Pakhtunkhwa on Thursday was ruled out by Minister for Science and Technology Fawad Chaudhry a day earlier, saying it will not be possible to spot the moon during sunset with telescopes.

He made the confirmation based on a computer-generated image showing the exact position of the moon.

The image was generated by the Pakistan Space and Upper Atmosphere Research Commission (Suparco).

“On April 23, the moon will only be 2 degrees above the horizon at sunset; it is impossible to spot the moon during sunset with telescopes. Therefore, if anyone living in Pakistan wants to fast with the people in Afghanistan and Saudi Arabia it is up to them,” he had said.

The ministry had stated earlier, that the Ramazan moon would be sighted nationwide on April 24 and the month of Ramazan will begin from April 25.

tweet
Share on FacebookShare on TwitterShare on PinterestShare on Reddit
Saman SiddiquiApril 23, 2020
the authorSaman Siddiqui
Saman Siddiqui, A freelance journalist with a Master’s Degree in Mass Communication and MS in Peace and Conflict Studies. Associated with the media industry since 2006. Experience in various capacities including Program Host, Researcher, News Producer, Documentary Making, Voice Over, Content Writing Copy Editing, and Blogging, and currently associated with OyeYeah since 2018, working as an Editor.
All posts bySaman Siddiqui