Salman Ahmed and PTI; will there be a patch up

Rockstar claims he has listed his reservations with the party leader 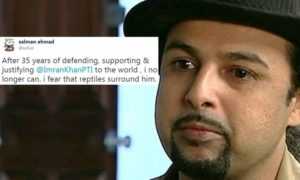 Since its inception, PTI has played the politics of acquisitions; from Shah Mahmood Qureshi to Javed Hashmi, and Javed Hashmi to Firdous Ashiq Awan, PTI has acquired electable candidates left, right and center whenever and whereever it saw fit to do so.

The acquisition of Dr Amir Liaqat Hussain, therefore, keeping this wee bit of history in mind, should not come as a surprise since it has become more or less the party’s policy to target and acquire those electable candidates, irrespective of the party’s manifesto or ideology, who can get voters to vote favourably for any given constituency.

However, there is something which is slightly different this time. There have been accusations and speculations in the past as well about the internal rifts in the party over various issues. So much so, that a former party member, Gulalai, severed all ties with PTI last year and created her own party, PTI-G. But as aforementioned, that was a different issue.

This time round, purely due to the acquisition of Dr Amir Liaqat Hussain, a long-standing PTI enthusiast took to Twitter, shared his grievances and actually pronounced his departure from the political party: the famous musician, Salman Ahmed.

Why is Salman Ahmed so anti-Amir Liaqat Hussain? His language is considered revealing, then he used expressions like ‘slithering snake’ and ‘reptiles’ for Dr Amir Liaqat Hussain that clearly depict his distrust for the man.

The Junoon star has added this;

“Amir Liaqat needs to apologize for all the hurt he has caused for distorting religion & accusing a Pakistan hero of blasphemy .we have to stop using blasphemy as a religious , political or personal tool to malign innocent people. Amir Liaqat can not be forgiven for all the hurt he has caused Pakistanis, when he accused My friend Junaid Jamshed & his mother of blasphemy. If a politician is going to openly accuse innocent Pakistanis with blasphemy he has to be brought to notice. I have protested strongly & I expect Amir Liaqat to apologise to Junaid Jamshed’s family for bringing a false & dangerous accusation upon him.”

#AmirLiaqat needs to apologise to Junaid Jamshed's family. Accusing anyone of blasphemy has to stop in https://t.co/IsbGxv843Y not distort Religion.

Salman Ahmed, further added that he is in contact with party leader Imran Khan, and has conveyed his reservations.

Will there be a patch up?