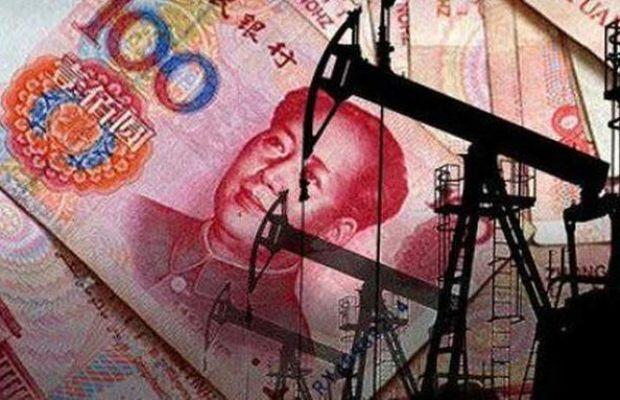 Saudi Arabia is considering accepting Yuan instead of Dollars for its oil sales to China, claims a report published by Wall Street Journal on Tuesday.

WSJ report claims that Saudi Arabia is in active talks with Beijing to price some of its oil sales to China in yuan.

Quoting people familiar with the matter, the publication said that such a move would dent the U.S. dollar’s dominance of the global petroleum market and mark another shift by the world’s top crude exporter toward Asia.

The talks with China over yuan-priced oil contracts have been off and on for six years but have accelerated this year as the Saudis have grown increasingly unhappy with decades-old U.S. security commitments to defend the kingdom, according to WSJ.

The report has left the hashtag #Dollar trending on social media, with claims that Dollar dropped amid the WSJ report claims.

Breaking: Saudi Arabia is considering settling oil sales to China not in US Dollars but in Chinese Yuan.

The decline of US hegemony is in full swing. This is exactly what we meant by the West "shooting itself in the foot". This is just the beginning.

Does anyone see a problem with this? Loss of the dollar as a reserve currency would be catastrophic. #dollar #USA pic.twitter.com/Vrslu8Udfh

Saudi Arabia is considering stopping using dollars in its #oil deals with China and using the yuan instead, reports The Wall Street Journal, citing sources.

It could be a severe setback for #US #dollar as a world currency.https://t.co/yvxbjY1llR

The Dollar as the world reserve currency is beginning to fall! 🚨🚨🚨#Dollar #Oil #Yuan #PetrolDollar https://t.co/09JXE7opOw

The US foreign policies led by @POTUS is finally nailing the final nail on the #Dollar coffin as an international reserve. https://t.co/NJd9u3XMLY

tweet
Share on FacebookShare on TwitterShare on PinterestShare on Reddit
Saman SiddiquiMarch 16, 2022
the authorSaman Siddiqui
Saman Siddiqui, A freelance journalist with a Master’s Degree in Mass Communication and MS in Peace and Conflict Studies. Associated with the media industry since 2006. Experience in various capacities including Program Host, Researcher, News Producer, Documentary Making, Voice Over, Content Writing Copy Editing, and Blogging, and currently associated with OyeYeah since 2018, working as an Editor.
All posts bySaman Siddiqui