Saudi Arabia Coronavirus Fear: Masjid-e-Haram and Prophet’s Mosque to be closed after Isha prayer & to reopen an hour before Fajr

Mataaf was also emptied for sterilization over fears of the new coronavirus. 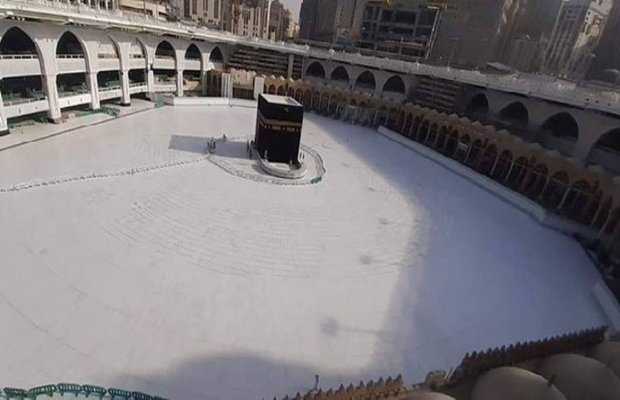 Saudi Arabia’s health ministry has announced three new cases of coronavirus in the Kingdom on Thursday.

Amid coronavirus spread fear, according to the new orders, the Grand Mosque known as Masjid-e-Haram in Makkah and the Prophet’s Mosque, Masjid-e-Nabvi (PBUM) in Madinah will be closed an hour after Isha prayer and will reopen an hour before the Fajr prayer.

Meanwhile, earlier on Thursday, Saudi Arabian authorities emptied the Kaaba for sterilization over fears of the new coronavirus.

The images of the moment when Mataf was completely empty were shared State television. The never seen totally empty white-tiled area surrounding the Kaaba — inside Makkah’s Grand Mosque, which is usually packed with tens of thousands of pilgrims.

#VIDEO: The circling area around Holy Kaaba at the Holy Mosque in #Makkah was emptied of people temporarily in order to clean and sterilize it, due to #Coronavirus fears and to insure the safety of pilgrims. pic.twitter.com/8CivSYbS29

Roumors started to spread that Baitullah had been completely emptied, however, that was not the case. People were present on the second floor of Masjid-e-Haram.

Tawaf continues on the second floor of al-Masjid al-Haram 🕋

Only the Mataf was cleared for cleaning and disinfecting.

Earlier on Wednesday, the kingdom issued orders,  halting the Umrah pilgrimage for its own citizens and residents.

Last week authorities had suspended all Umrah and travel visas.