CJP took his first suo motu notice on April 10 on the situation arising amid coronavirus crisis and the steps being taken by the federal government to curb its spread. 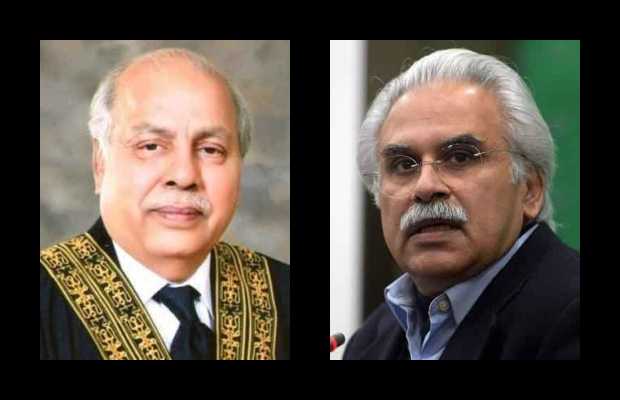 The Supreme Court (SC) on Monday has directed the federal government to remove Special Assistant to the Prime Minister on Health Dr. Zafar Mirza. As the top court expressed dissatisfaction over his performance in tackling the coronavirus outbreak.

A five-judge bench of the top court, headed by Chief Justice Gulzar Ahmed, heard a suo motu case on the government’s measures to curb the spread of coronavirus in the country.

The SC said that Prime Minister Imran Khan’s cabinet has become infective in the fight against the pandemic.

CJP Gulzar Ahmed questioned the transparency of work done by Dr. Mirza and said that there were some serious allegations against the team of special assistants to the prime minister.

The attorney general responding to the CJP’s comments regarding dismissing Mirza replied that removing the PM’s aide during this point and time would be disastrous.

“Do not change him mid-flight,” he said, requesting the court to leave the matter up to the federal government.

Replying to this, the CJP replied that he is very careful in passing such remarks.

CJP took his first suo motu notice on April 10, since assuming the charge as the country’s top judge on the situation arising amid coronavirus crisis and the steps being taken by the federal government to curb its spread.

Earlier in the hearing, the top court had questioned the performance of the federal government in tackling the coronavirus situation.

“The government has only provided census to the court,” CJP said.

“No country in the world was prepared to fight such a disease,” the attorney general replied.

The CJP inquired when the parliament would legislate on the crisis. “Rest of the countries have passed a law to deal with the emergency.”

“The state has other jobs rather than just holding rallies,” the CJP said. “ Prime Minister’s cabinet has become ineffective. He seems distant from the rest. All the provinces are doing whatever they desire.”

tweet
Share on FacebookShare on TwitterShare on PinterestShare on Reddit
Saman SiddiquiApril 13, 2020
the authorSaman Siddiqui
Saman Siddiqui, A freelance journalist with a Master’s Degree in Mass Communication and MS in Peace and Conflict Studies. Associated with the media industry since 2006. Experience in various capacities including Program Host, Researcher, News Producer, Documentary Making, Voice Over, Content Writing Copy Editing, and Blogging, and currently associated with OyeYeah since 2018, working as an Editor.
All posts bySaman Siddiqui