Ban has been imposed on entry of political leaders in SC 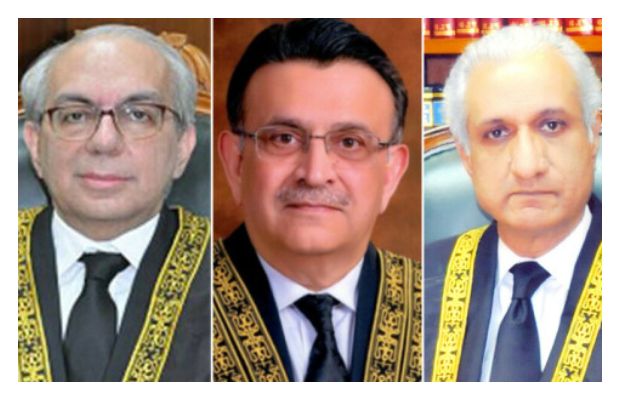 All eyes set on the Supreme Court as the apex court resumed hearing the petition on Speaker Punjab Assembly Pervez Elahi’s petition on the election of the province’s chief minister on Monday.

While all the political leaders have been barred to enter the SC.

At the outset of today’s hearing, Advocate Latif Afridi, the former head of the Supreme Court Bar Association (SCBA), appeared before the court.

The chief justice observed that several former SCBA presidents were present in the courtroom.

Advocate Latif Afridi, pleaded to the court on behalf of lawyers’ bodies, saying the system is facing dangers as there are numerous challenges.

“The review petition in the Article 63(A) case should be fixed before a full court,” Afridi said.

He noted that the political crisis in the country was deepening over time.

Afridi added that cases challenging the Election Commission of Pakistan’s (ECP) decision to de-seat lawmakers over defection were also being heard.

Afridi requested that a full-court bench should be formed to avoid a constitutional crisis.

PPP lawyer Farooq H Naik also appeared before the bench and said that he has requested to become a party in the case, at which the CJP told him that let the initial matters be wrapped up first.

“We will hear you, but let the proceedings move in line with the order. Please sit, I hope that your seat will be vacant,” the CJP said.

In response, Naik told him that “seats come and go”.

To which, the CJP asked him the grounds on which a full court bench should be constituted.

Irfan Qadir requested the bench to read paragraphs one and two of its decision on the presidential reference seeking interpretation of Article 63-A, stating that everything would then be clarified.

Qadir argued that “The party head issues instructions to [members of] a political party,” adding, that Article 63-A could not be read individually.

“Political parties have an important role in parliamentary democracy. The democratic system can be endangered due to the weakness of political parties,” he maintained.

He also termed defection from party policy a “cancer”.

SCBA President Ahsan Bhoon appearing before the bench said that he could not “imagine” pressurizing the court, but noted that the review petition on Article 63A should be heard.

To which  CJP responded, “What’s the hurry Bhoon Sahab, let us hear this case first.”

Pervez Elahi’s lawyer Barrister Ali Zafar said that he has also remained the president of the bar.

“The bar presidents should not be involved in such matters,” he said.

Mazari’s counsel also demanded for a formation of a full bench. He then read out the court’s order issued on July 23.

At this, the CJP asked the lawyer how the deputy speaker arrived at the conclusion that the court’s order on Article 63 (A) gives the impression that it speaks about the party head.

“This question is for you [and] that is why a special bench has been formed. The question here is what happens when the party head and the parliamentary party’s decisions differ?”

Mazari’s counsel  Qadir said that it was not his job to define what questions arise here, but it was the court’s task.

The CJP at his remarks asked him to read out Article 63 (A).

The CJP added that the article mentions the party head and the parliamentary party.

tweet
Share on FacebookShare on TwitterShare on PinterestShare on Reddit
Saman SiddiquiJuly 25, 2022
the authorSaman Siddiqui
Saman Siddiqui, A freelance journalist with a Master’s Degree in Mass Communication and MS in Peace and Conflict Studies. Associated with the media industry since 2006. Experience in various capacities including Program Host, Researcher, News Producer, Documentary Making, Voice Over, Content Writing Copy Editing, and Blogging, and currently associated with OyeYeah since 2018, working as an Editor.
All posts bySaman Siddiqui