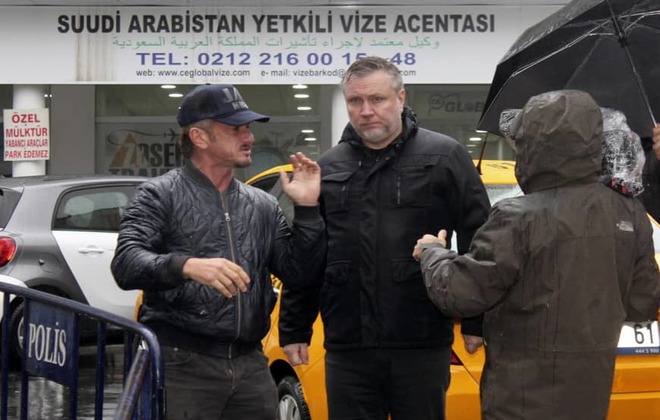 According to the Turkish officials, two-time Oscar winner Sean Penn is in Turkey working on a documentary about the murder of the journalist Jamal Khashoggi at the Saudi Consulate in Istanbul.

There were photos and video released by the Turkish media showing the Milk and Dead Man Walking star with a camera crew outside the Saudi consulate.

BBC Turkey has also reported that Penn was accompanied by 10 people, including the film crew and bodyguards and was working with a production team.

Adviser to Turkey’s president, Yasin Aktay, told the Associated Press on Thursday that Sean Penn interviewed him in Ankara as part of his “preliminary preparations” for the documentary before leaving for Istanbul where he was due to meet with Khashoggi’s Turkish fiancee.

Aktay, a friend of Jamal Khashoggi, was the first to alert authorities that the journalist had disappeared inside the consulate.

It’s been two months when the Washington Post columnist is reported to be killed by the Saudi agents on 2nd October after arriving at the Saudi Consulate in Istanbul, to handle routine paperwork. Jamal Khashoggi was considered critical of the Saudi Prince Mohammad bin Salman, which led to his murder.

According to the Istanbul prosecutor, Khashoggi was strangled to death after he entered the Saudi consulate and his body was then dismembered and destroyed. The Turkish police and crime scene investigators were still trying to locate the remaining parts of his body across Istanbul and the neighbouring Yalova province.

The scandal still rolls on, and US senators laying the blame squarely at the Saudi leader’s door, it appears that Penn has wasted no time in putting one of the Middle East’s most notorious stories to film.

tweet
Share on FacebookShare on TwitterShare on PinterestShare on Reddit
Saman SiddiquiDecember 7, 2018
the authorSaman Siddiqui
Saman Siddiqui, A freelance journalist with a Master’s Degree in Mass Communication and MS in Peace and Conflict Studies. Associated with the media industry since 2006. Experience in various capacities including Program Host, Researcher, News Producer, Documentary Making, Voice Over, Content Writing Copy Editing, and Blogging, and currently associated with OyeYeah since 2018, working as an Editor.
All posts bySaman Siddiqui