The restriction would be applicable till the completion of the demolition work. 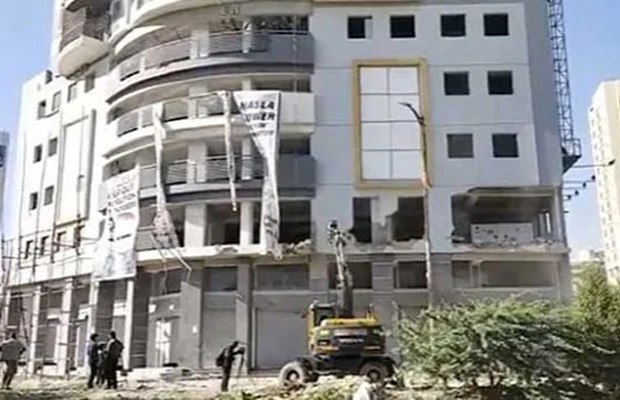 The Sindh government has imposed Section 144 around Karacih’s Nasla Tower as demolition of the building continues.

The assembly of four or more people at the surrounding of and inside Nasla Tower has been banned, according to a notification issued.

The decision has been taken at the request of the Deputy Commissioner District East and a notification has been issued by the Home Ministry.

As per the notification, Section 144 of the Code of Criminal Procedure (CrPC) empowers a district administration to issue orders in the public interest that may place a ban on an activity for a specific period of time.

According to the notification, some people may turn violent during the demolition. Therefore, the gathering of more than four persons will be prohibited.

Strict action will be taken against those who interrupt in the work, it said.

The notification also bars people to cross the barriers around the tower.

The deputy commissioner district East and assistant commissioner Ferozabad are authorised to take action against the violators in coordination with the concerned senior superintendent of police.

A huge contingent of law enforcers has been deployed at the Nasla Tower as demolition work on the order of the Supreme Court is underway.

tweet
Share on FacebookShare on TwitterShare on PinterestShare on Reddit
Saman SiddiquiNovember 28, 2021
the authorSaman Siddiqui
Saman Siddiqui, A freelance journalist with a Master’s Degree in Mass Communication and MS in Peace and Conflict Studies. Associated with the media industry since 2006. Experience in various capacities including Program Host, Researcher, News Producer, Documentary Making, Voice Over, Content Writing Copy Editing, and Blogging, and currently associated with OyeYeah since 2018, working as an Editor.
All posts bySaman Siddiqui