The leaders of the opposition parties recorded their protest, tore apart copies of the agenda 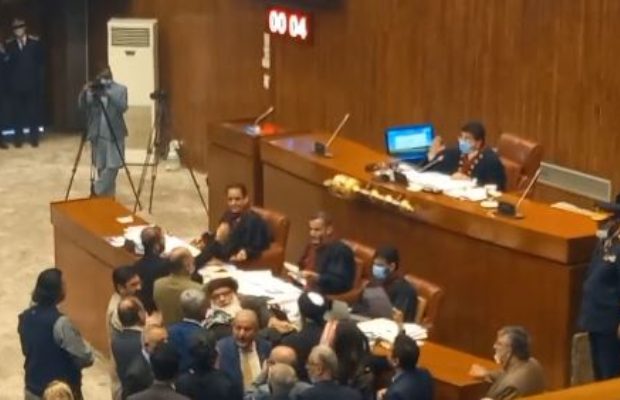 The Senate on Friday approved National Accountability Bureau (NAB) Amendment Ordinance 2021 and the Journalist Protection and Media Professionals Bill amid the opposition’s protest.

During the session chaired by Senate Chairman Sadiq Sanjrani, the leaders of the opposition parties recorded their protest, tore apart copies of the agenda, and chanted slogans against the PTI government for getting the legislation passed through supplementary agenda.

Leader of the Opposition in the National Assembly Shahbaz Sharif decried the “use of namaz time” (Friday prayer time) by the government for the passage of the National Accountability Amendment Bill 2021.

In a statement on Twitter shared by PML-N, Shahbaz was quoted as saying: “Approval of NAB supplementary bill after bulldozing legislation in the joint sitting of Parliament is open malice.”

On the other hand, PPP Senator Sherry Rehman via a tweet lashed out at the government for being unwilling to listen to the opposition.

“What was left of parliament in the Senate was destroyed today when the treasury introduced a supplementary agenda at 12.35 pm without laying bills and just called in members to bulldoze a NAB bill. From now on the Senate too will not run,” she said.

Rehman said that the government was unwilling to allow the provinces to “speak or breathe”.

“Tabahisarkar is unwilling to allow the provinces to speak or breathe, nor our questions on the sovereignty of Pakistan be asked, whether re IMF or amnesty deals. They r unwilling to hear us on the census or water or any resource share of the provinces, as that is what the Senate does,” she added in her next tweet.