In case of non-adherence, Malik will initiate civil and criminal proceedings against Ritchie. 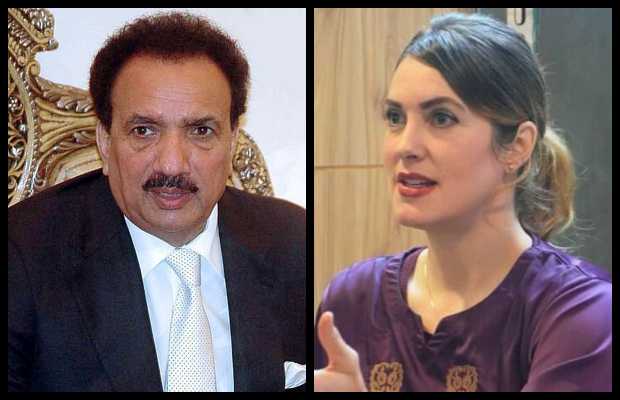 The legal notice was sent through his lawyer, it emerged on Sunday,

Rehman Malik, through the notice, has demanded from Ritchie Rs500 million in damages, “prompt” withdrawal of the allegations “in the same manner in which it was released and posted on social, print and electronic media” within 15 days of receiving the notice, as well as an “unqualified apology”.

In the sent notice, Malik acknowledges that he met Ritchie in his office in the Ministry of Interior in the presence of Azam Swati’s daughter regarding a visa issue.

“Any other meeting regarding your visa with [Malik] is out of the question,” it says.

The notice referring to Ritchie’s tweet regarding Benazir Bhutto, says, “noticed all of a sudden you emerged on [the] social media scene and began a smearing campaign” against the late prime minister, adding that subsequent action was taken by PPP leaders.

In case of non-adherence, Malik will initiate civil and criminal proceedings against Ritchie, says the notice.

Meanwhile, responding to the legal notice, Islamabad based American blogger Cynthia Ritchie says that will also initiate legal proceedings against Malik and is in talks with a legal team.

Earlier today, in a tweet she said, “this week will involve criminal proceedings, finally, against PPP, Rehman Malik, et alia. US Embassy in Islamabad has been informed, of course, and I anticipate meetings to follow through with these matters”.

Taking time off from SM media to tell my story on traditional media.

This week will involve criminal proceedings, finally, against PPP, Rehman Malik, et alia. @usembislamabad has been informed, of course, and I anticipate meetings to follow through with these matters.

The US blogger took to Facebook Live, claiming that the ex-interior minister raped her adding that two other senior PPP leaders also physically manhandled her.

tweet
Share on FacebookShare on TwitterShare on PinterestShare on Reddit
Saman SiddiquiJune 7, 2020
the authorSaman Siddiqui
Saman Siddiqui, A freelance journalist with a Master’s Degree in Mass Communication and MS in Peace and Conflict Studies. Associated with the media industry since 2006. Experience in various capacities including Program Host, Researcher, News Producer, Documentary Making, Voice Over, Content Writing Copy Editing, and Blogging, and currently associated with OyeYeah since 2018, working as an Editor.
All posts bySaman Siddiqui