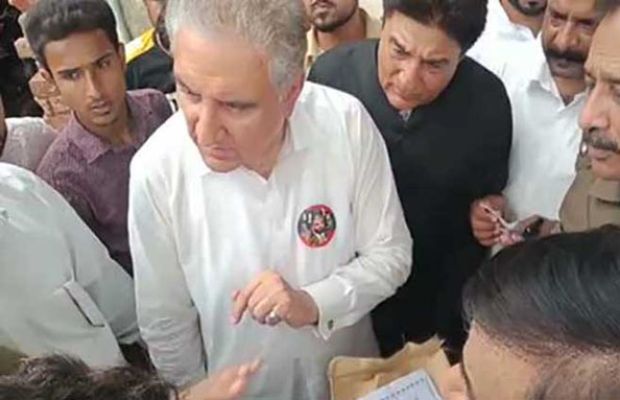 According to him, he reached a private factory on Vehari Road along with the PTI workers and blamed that there was a fake polling station inside the factory.

Upon reaching the location, he repeatedly slammed the gate of the factory and shouted “Open the door! You are stamping ballot papers inside.”

“Where is the returning officer? Can’t he see that?” he questioned.

“If you do not let me in, at least show Rohi TV channel the situation inside,” Qureshi said to the factory workers.

On the other hand, Factory owner Zulfiqar Chaudhry said that Shah Mehmood Qureshi came to the factory with armed guards.

He said that a clash could have occurred in the factory if we opened the gate.

The factory management added that they were going to submit a complaint to the district returning officer.

While Shah Mahmood Qureshi on Sunday was also prevented from entering the polling station of Basti Dogran by the Pakistan Muslim League-Nawaz (PML-N) workers.

The Returning Officer took notice of an issue of manual voting at the polling station in PP-217.

He also questioned the Presiding Officer in this regard.

The Returning Officer also inquired from the voters present at the polling station, while the Presiding Officer and voters denied the allegation of forced voting.