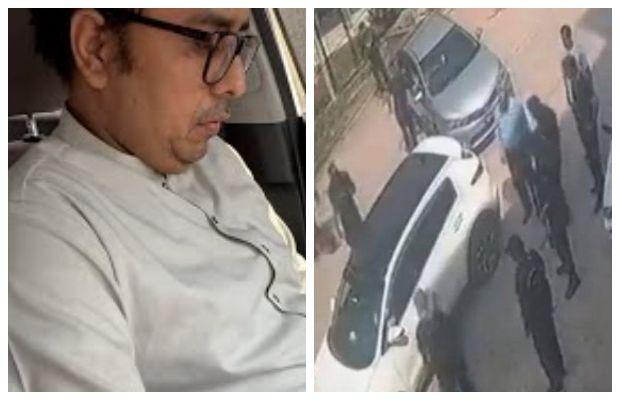 Shahbaz Gill was arrested by Islamabad police on charges of sedition, inciting public against state institutions on Tuesday.

CCTV footage has come to light that captured the PTI Leader being arrested by police at Bani Gala Chowk.

PTI leadership claimed that Shahbaz Gill was tortured by the unidentified men who kidnapped him.

However, the Islamabad Police officers were present in uniform at the time of his arrest.

A police mobile van can also be seen in the CCTV footage.

The CCTV footage contradicts the claim, it clearly shows that the security personnel were signaling Gill to come out of a car.

However, when he did not comply with the orders, they shattered the window of the car with a gun.

Gill can be seen coming out of his car and walking up to the police vehicle himself. contrary to PTI’s claim that he was dragged and tortured.

He can be seen going to sit in the official’s car by himself.

The CCTV video shows that Shahbaz Gill’s driver was not tortured at all, contrary to the claims of Gill’s driver regarding his torture also proved to be false.

CCTV footage of the arrest of Shahbaz Gill, the chief of staff of PTI Chairman Imran Khan, in Islamabad on Tuesday, a day after his controversial comments while speaking to ARY News.#DSTV #shahbazgill pic.twitter.com/Dz0BEsaXxI

PTI leader Fawad Chaudhry on Tuesday claimed that Gill was “abducted” from the Banigala Chowk by unidentified personnel in cars with missing number plates.

Fawad Chaudhry in his later Tweet said that Gill’s whereabouts and the details of the case against him were still unknown.

Interior Minister Rana Sanaullah later confirmed that PTI leader Shahbaz Gill was arrested by the Islamabad police “in accordance with the law” on charges of sedition and inciting the public against the state institutions.

The case was registered against Shahbaz Gill at Magistrate Ghulam Murtaza Chandio’s complaint under sections 34 (common intention), 109 (abetment), 120 (concealing design to commit an offense punishable with imprisonment), 121 (waging war against the state), 124-A (sedition), 131 (abetting mutiny, or attempt to seduce a soldier, sailor or airman from his duty), 153 (provoking to cause riot), 505 (statement conducing to public mischief) and 506 (punishment for criminal intimidation) of the Pakistan Penal Code.

tweet
Share on FacebookShare on TwitterShare on PinterestShare on Reddit
Saman SiddiquiAugust 10, 2022
the authorSaman Siddiqui
Saman Siddiqui, A freelance journalist with a Master’s Degree in Mass Communication and MS in Peace and Conflict Studies. Associated with the media industry since 2006. Experience in various capacities including Program Host, Researcher, News Producer, Documentary Making, Voice Over, Content Writing Copy Editing, and Blogging, and currently associated with OyeYeah since 2018, working as an Editor.
All posts bySaman Siddiqui