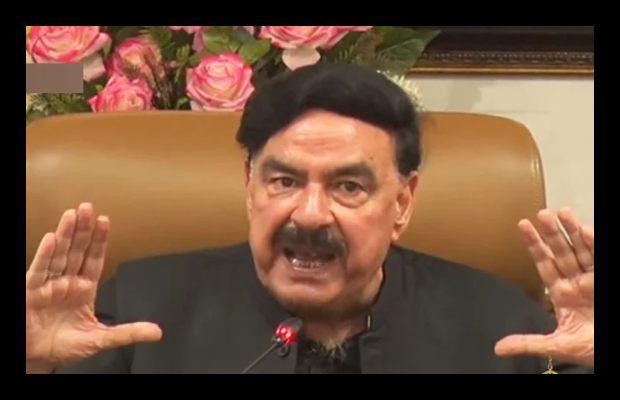 Sheikh Rasheed has hinted that the country might have early elections!

Interior Minister Sheikh Rashid Ahmed at a press briefing on Thursday has hinted that the country might move towards early elections as he talked about the upcoming Vote of No Confidence against PM Imran Khan at the National Assembly.

“I want Pakistan and democracy to progress […]. The situation in the country is moving towards betterment with every passing day,” the interior minister said.

While addressing a press conference in Punjab’s capital, Lahore, the minister added that “Those who are changing parties and thinking they will get respect, they are wrong.”

“Those who are [genuine] remain intact with democracy and their party,” he added.

Sheikh Rasheed also claimed that some opposition members would also not go to parliament on the day of the no-trust vote.

Terming those members “responsible”, the interior minister added that they understood that it would be “better” if PM Imran completed his tenure and early elections were called.

“The opposition has to rethink the situation in view of the global scenario,” he added.

The interior minister added that the final will be held on the night of March 27 and it will be clear who are the people with.

“Let me tell you with the responsibility that nobody is going anywhere,” the minister asserted, adding that he met Punjab Chief Minister Usman Buzdar who is firmly standing with Imran Khan.

“He is also not going anywhere,” Rashid said regarding CM Punjab Usman Buzdar.

It was a day ago when Prime Minister (PM) Imran Khan has said that he will not step down under any circumstances.

He also claimed that he will emerge victorious from this no-confidence motion issue.

PM Imran Khan made the remarks while talking to journalists in Islamabad on Wednesday.

He said he will show his trump card a day before voting on a no-confidence motion against him.

The politics of opposition is going to end and the allies will announce support to the PTI-led government after a public rally of March 27, PM Imran said.

“The fight has just begun, I will emerge victorious in this battle,” PM Imran Khan stated.

tweet
Share on FacebookShare on TwitterShare on PinterestShare on Reddit
Saman SiddiquiMarch 24, 2022
the authorSaman Siddiqui
Saman Siddiqui, A freelance journalist with a Master’s Degree in Mass Communication and MS in Peace and Conflict Studies. Associated with the media industry since 2006. Experience in various capacities including Program Host, Researcher, News Producer, Documentary Making, Voice Over, Content Writing Copy Editing, and Blogging, and currently associated with OyeYeah since 2018, working as an Editor.
All posts bySaman Siddiqui