According to Sindh govt. these companies have started their services without acquiring root permits, vehicle fitness certificate and NOC. 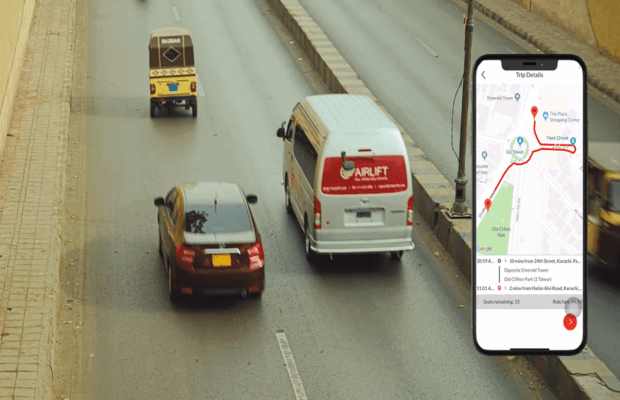 It’s been a while that new transport services appeared on the streets of Karachi, Airlift, and Swvl. However, the Sindh government is likely to ban both the services.

As being reported, Sindh Government’s Transport Secretary Ghulam Abbas Detho has written a letter to the Regional Transport Authority asking him to stop the services of Airlift and Swvl.

According to the details revealed, the letter says that these companies have started their services without a Vehicle Fitness Certificate and No Objection Certificate (NOC).

Ghulam Abbas Detho has further shares that that Airlift, Swvl, and similar other companies are providing coaster facilities to customers using advanced technology and internet apps without acquiring root permits and vehicle fitness certificates, which is damaging the state exchequer.

Furthermore, in this regard, a notice has also been sent to the secretary of the Regional Transport Authority, Nazar Hussain Shahani.

The notice states that those ordinary vehicles have been added to the service without being registered through any regulatory bodies. Traveling in such cars by the common people is a security risk.

After the online registration, the vehicles of the companies providing travel services to the consumers are operating on a commercial basis without a route permit. This is a violation of section 2 (5), (20), section 39 and section 40 of the Motor Vehicle Ordinance 1965.

Lawsuits should be taken against these companies for the protection of the public and to increase government revenue.

The notification has also directed the relevant authorities to immediately notify them of litigation against these companies.

In this regard, the Regional Transport Authority (RTA) Secretary Nazar Hussain Shahani, while talking to Jassart, said that these coaster services running through online apps have not taken permission from the government. They have been informed by providing them a week’s notice to respond in this regard, otherwise, these services will be shut down.

“We have sent a letter to the companies a week ago asking them to obtain route permit, after which they can drive their cars on the streets of Karachi otherwise, their cars will be locked down”, he added.

He further added that we are waiting for them to reply in a week’s duration if the companies fail to reply we will send another letter. And even if they fail to respond to the second letter, we have informed DIG traffic to initiate action against these transport companies. As it is the responsibility of the traffic police is to take action.

He further added that currently there exists no law regarding online transport service in Pakistan. ”In this regard, our legal experts are working and 90% of the work is completed. The bill will be presented in the cabinet soon after which there will be a law on online service provider vehicles”, he added further.

On the other hand, Executive Director of AIRLIFT Pakistan Syed Maher Haider while speaking to Jassart, said that “we are committed to working with them to remove all the concerns of the Sindh government”.

“We are ready to fully cooperate with the Government of Sindh, we have received a letter from the Regional Transport Authority (RTA) of the Government and we will be responding to the letter soon”, he added.

tweet
Share on FacebookShare on TwitterShare on PinterestShare on Reddit
Saman SiddiquiNovember 10, 2019
the authorSaman Siddiqui
Saman Siddiqui, A freelance journalist with a Master’s Degree in Mass Communication and MS in Peace and Conflict Studies. Associated with the media industry since 2006. Experience in various capacities including Program Host, Researcher, News Producer, Documentary Making, Voice Over, Content Writing Copy Editing, and Blogging, and currently associated with OyeYeah since 2018, working as an Editor.
All posts bySaman Siddiqui