Sabika was amongst the 10 students who lost their lives to a violent gunman’s rage on the unfortunate day. 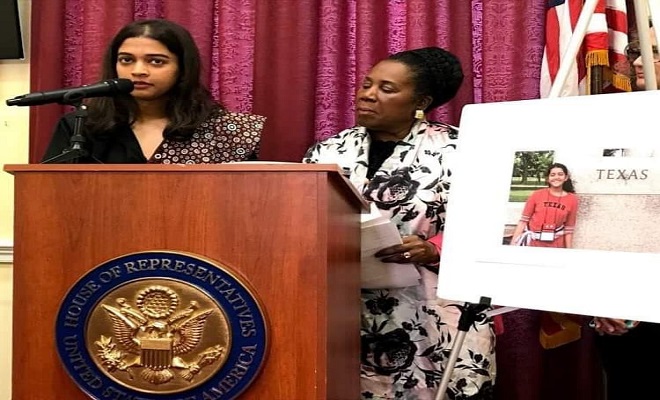 On May 18, 2018, Pakistan received a horrifying news as one of its exchange students Sabika Sheikh, studying in US under Youth Exchange and Study (YES) program, was killed in the shooting at Sante Fe High School. Sabika was amongst the 10 students who lost their lives to a violent gunman’s rage on the unfortunate day.

Sabika’s cousin Shaheera Jalil Albasit, who was also in US under the same program, vowed to herself to find a solution to the menace that had taken her innocent cousin’s life. In order to pursue her cause, legally, Shaheera initiated her quest to formulate a bill against gun violence in the US that had taken as many as 40,000 lives in 2017 – a year before Sabika’s demise.

Shaheera’s hard work of two years paid off, and yesterday she shared the deets of ‘The Sabika Sheikh Firearm Licensing & Registration Act’ that she represented at the US Capitol building on her last day in the US.

“I came to US in 2017 as Fulbright scholar from Pakistan. 1 day before my arrival, arrived my sweetest, most humble cousin Sabika. We both were exchange students. In 2017, when I took my first touristy photo in front of US Capitol Building, I did not know that 1 year later this place will become central to everything I would do in this country,” recalled Shaheera on her Facebook.

A year after Sabika was killed in cold blood, Shaheera’s struggle started to help curb the menace in the country. Shaheera also shed light upon the obstacles she had to overcome in the fulfillment of her quest.

This is our first step towards justice since May 18, 2018. pic.twitter.com/DLGwaccQ35

“After Sabika’s murder, I returned to US with one purpose: To get a gun safety legislation introduced for her in US Congress. In last one year, for every 1 step forward, there were 99 rejections. Especially as someone not from the US, I struggled at the most basic levels,” she stated.

While she happily shared that she has managed to present the bill, she hoped that the anti-gun legislatures will do their best to transform it into a law.

One year. The longest year. pic.twitter.com/HKgSC92wTG

“On July 26, 2019, miraculously on the very last working day before my departure from US, I stood in the same building, the US Capitol, alongside 2 Congresswomen, and introduced ‘The Sabika Sheikh Firearm Licensing & Registration Act’. A first-of-its-length, historic bill which prescribes a complete process for guns and ammunition in the US to be licensed and registered,” penned down Shaheera.

“I now look toward gun violence prevention groups to ensure that this life-saving bill becomes law,” she added.