Sonu Nigam has called Indians ‘Stupid’, asks them to ‘Grow Up’

Talking to a group of journalists, Sonu advised the Indian media to be mature and responsible with its coverage. 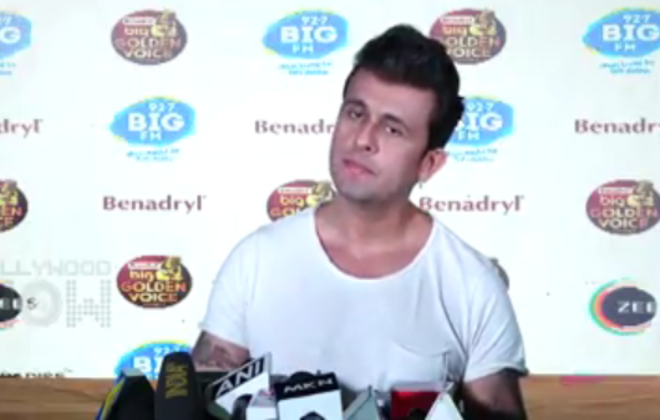 The whole world has seen the latest response from Bollywood actors promoting jingoism and hatred towards Pakistan while talking in support of the Indian army.

However, in this all ongoing melodrama few sane voices also standout, the recent was the response from the famed Bollywood playback singer Sonu Nigam.

He has slammed his country’s media for its senseless sabre-rattling and sensationalism amid tensions with Pakistan.

While criticizing Indian media and his countrymen, Sonu Nigam said that Indians become absolutely immature and that “we Indians really need to grow up”.

“This is a very crucial time for our nation. I have always been against war,” he said.

“Let [your opponent] take a shot first,” he added. “If you tease, they are going to tease you back.”

Sonu further added, “A wise nation always behaves well and with class. All of the debates taking place on TV channels are set in an immature discourse.”

“I believe that we, as Indians, really really need to grow up!” he stressed.

“I also think we need a responsible media which we lack at this point,” he asserted.

Here is the video clip, which is being circulated in social media  in which Sonu Nigam is talking to the group of journalists:

tweet
Share on FacebookShare on TwitterShare on PinterestShare on Reddit
Saman SiddiquiMarch 2, 2019
the authorSaman Siddiqui
Saman Siddiqui, A freelance journalist with a Master’s Degree in Mass Communication and MS in Peace and Conflict Studies. Associated with the media industry since 2006. Experience in various capacities including Program Host, Researcher, News Producer, Documentary Making, Voice Over, Content Writing Copy Editing, and Blogging, and currently associated with OyeYeah since 2018, working as an Editor.
All posts bySaman Siddiqui