On July 21, the Hang Tong 77, got stuck in the sand near Seaview Beach in the city due to a broken hanger. 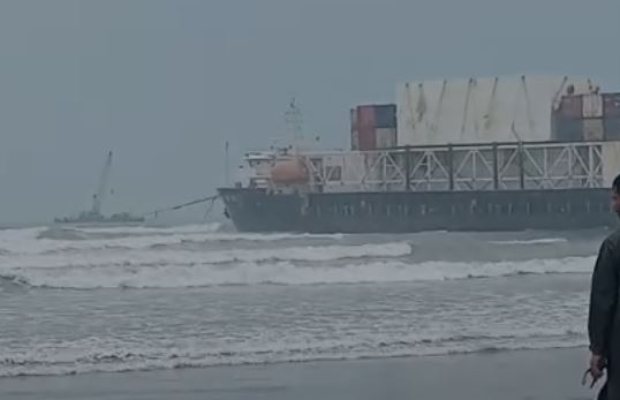 The operation to salvage a stranded cargo ship, Hang Tong 77, from Karachi’s shore was successfully completed after 48 days, on Tuesday.

Special Assistant to PM on Maritime Affairs Mahmood Moulvi said that the rescue team has successfully brought the ship into the deep sea.

He added that the vessel will remain in government custody, and will be kept at Karachi Harbour.

“The owner of the ship will bear all the costs of the rescue operation,” he mentioned.

“The ship will be permitted to leave the harbour after carrying out technical checks,” he added.

Mahmood said that in the past, ships were cut up after they got stuck at the same spot and this is the first one that was salvaged without any damage.

The spokesman of a company that rescued the ship, Arif Shaikh, said that the tug vessels have taken control of the ship and it will be taken to the harbour.

“We faced difficulties during the operation due to low water level. However, our team did a remarkable job,” he added.

The Hang Tong 77, manufactured in 2011, got stuck in the sand near Seaview Beach on July 21 due to a broken hanger.

The ship is reported to be registered in Panama and weighs 2,250 tons.