The entire Piyan Mountain Scenic Area has since been closed and officials have ordered a comprehensive safety inspection of all attractions in the area, including the bridge. 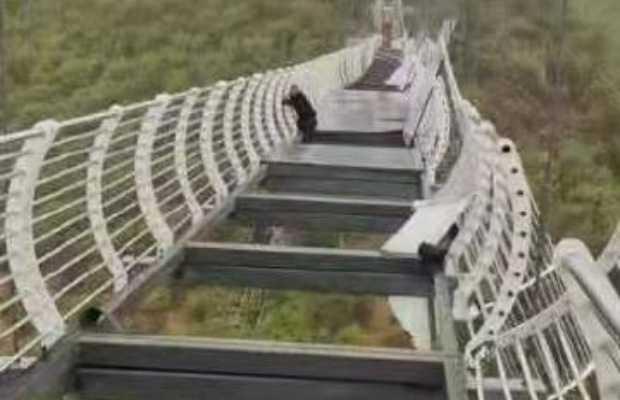 A popular attraction for tourists, Zhangjiajie Glass footpath is a skywalk bridge in Zhangjiajie, Hunan, above the Wulingyuan area.

However, strong winds shattered a 100-meter-high glass bridge near the city of Longjing shattered and left a tourist stranded.

According to a  statement posted to Longjing City’s official Weibo social media account said that the Piyan Mountain tourism area, in the country’s northeast, had experienced extreme weather on Friday, damaging several panes of the glass deck.

According to the officials, the rescue teams were called in to assist the stranded tourist, who was able to evacuate the bridge at 1:20 p.m.

“The staff of the scenic area rushed to the scene as soon as possible, brought emergency equipment, and successfully transferred the trapped person to a safe area,” said the statement.

“There were no casualties. After being kept in the hospital for observation, the trapped person was in the stable emotional and physical condition and has been discharged from the hospital.”

As being reported, the entire Piyan Mountain Scenic Area has since been closed. While the officials have ordered a comprehensive safety inspection of all attractions in the area, including the bridge.

China is famous for its record-breaking state-of-the-art glass bridges, which are also popular tourist attractions.

Among them, there is also a new 526-meter-long structure in Qingyuan, Guangdong, which holds the Guinness World Record for the longest glass-bottom bridge.

However, the recent incident has left a number of netizens in China are questioning the safety of glass bridges.