Suhai Talpur: The lady on the frontline of Chinese consulate operation

Two police officials were martyred while carrying out retaliatory firing. 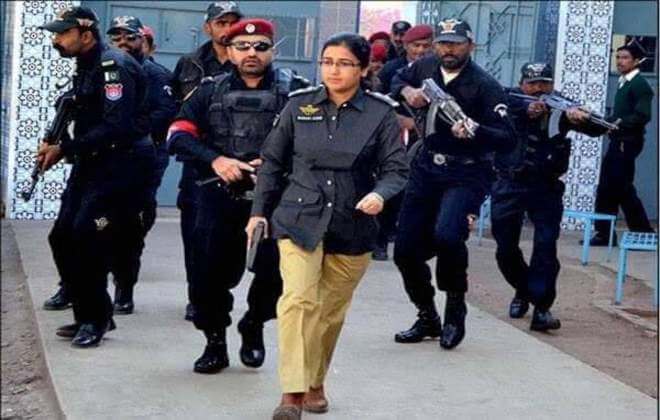 Assistant superintendent of police Suhai Aziz Talpur, has lead the operation on front line against attackers at Chinese Consulate in Karachi.

She was among the first to rush to the location upon reports of gunshots and blasts heard outside the building.

ASP Suhai Aziz successfully led the security operation to foil the terrorist attack on the Chinese consulate, engaging the suspects on the site.

She showed examplary courage, making the nation proud of her. Suhai Talpur joined the police force after clearing her CSS in 2013.

As being reported, IG Police has recommended for awarding Quaid-i-Azam Police medal for ASP Clifton, Sohai Aziz for bravery she demonstrated in foiling terrorist attack on the Chinese Consulate.

She is the first female Police officer being recommended for the award. IG has also announced award of Rs. 2 lac each and commendable certificate for SSP South Pir Muhammad Shah and SSP Investigation Tariq Dharejo.

Suhai Aziz is being praised for her bravery not just from government, but also from whole Pakistan.

The reprehensible terrorist attack on the Chinese consulate in Karachi, was thwarted by the courageous fight put up by our Sindh Police led by the courageous SSP Suhai Aziz. I salute the brave officers who were martyred courageously protecting our friends. We honor them

In the middle of a hard day, Pakistan’s 🇵🇰remarkable women rise to be the silver lining. So proud of SSP Suhai Aziz Talpur, the woman who fearlessly spearheaded the vanguard of the successful police operation against terrorists at Chinese consulate. pic.twitter.com/tsu1bMttLz

She is SSP Suhai Aziz Talpur, the brave police officer who lead the operation against terrorists in #Karachi Today#SalamPolice pic.twitter.com/mqhNeyUgoj

ASP Clifton Suhai Aziz, was the first to respond and led the police team to engaged terrorists who attacked #ChineseConsulate in #Karachi today#SindhPolice
P.S This photo was taken when she was in Jamshoro pic.twitter.com/NXSLwF414v

The Karachi attack today took place a minute from my house. Gunshots heard by parents. Thoughts and prayers with the law enforcement officers and civilians killed. Commendable response by Karachi police who led the operation under the command of SSP Suhai Aziz Talpur.

Security forces earlier today foiled an attack on the Chinese consulate located in Karachi’s upscale area of Clifton. The successful operation led to the killing all three terrorists and seizing at least nine hand grenades, Kalashnikov bullets, magazines and explosives.

The attack is being condemn on all levels, PM Imran Khan has issued a statement in response of this latest development.

Prime Minister has quoted, “Strongly condemn the terrorist attacks against Chinese Consulate in Karachi & in Orakzai tribal area. My prayers go to the victims & their families. Salute the brave security/police personnel who gave their lives & denied success to terrorists in the mission ag Chinese Consulate”.

I am absolutely clear both these attacks are part of a planned campaign to create unrest in the country by those who do not want Pakistan to prosper. Let there be no doubt in anyone's mind that we will crush the terrorists, whatever it takes. https://t.co/AhPpjsUGEq

“The failed attack against the Chinese Consulate was clearly a reaction to the unprecedented trade agreements that resulted from our trip to China. The attack was intended to scare Chinese investors and undermine CPEC. These terrorists will not succeed”, says the PM’s latest tweet.

The failed attack against the Chinese Consulate was clearly a reaction to the unprecedented trade agreements that resulted from our trip to China. The attack was intended to scare Chinese investors and undermine CPEC. These terrorists will not succeed.