Sunny Leone can ward off an Evil Eye!

As it seems in India! 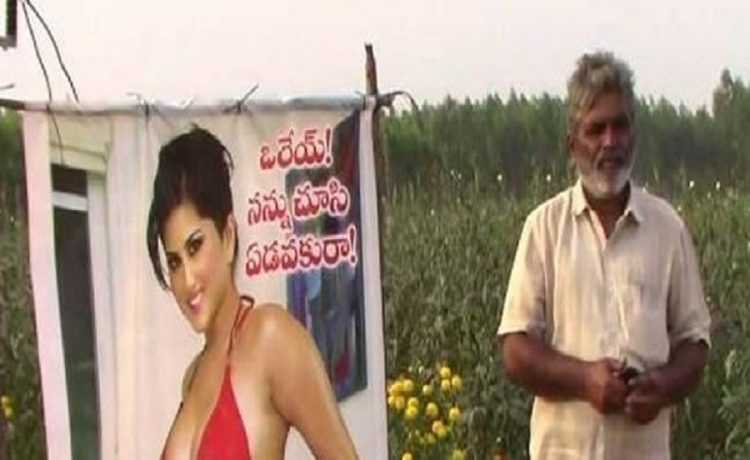 Sunny Leone has been into news for all possible reasons one can think of. She rather carries herself beautifully, poised and graceful but the media never stops making a sensational piece out of anything that concerns her. And this time the news is a classic piece, as it seems, even Sunny herself cannot fathom such a thing ever.

As reported by an Indian daily, a farmer puts a large poster of the actress Sunny Leone to keep his crops safe from evil eye of local residents of his village. A super attractive version of scare crow, and the unusual trick has worked, the farmer claims.

Chenchu Reddy has a large vegetable crop in Banda Kindi Palle, a village in India’s Nellore district in the southeastern state of Andhra Pradesh. Recently, the farmer says his impressive crops have started to gain the attention of locals. The farmer says that this year he had a good crop which started to gain attention of locals.
The slogan on the poster in the Telegu language, says, “Hey, don’t cry or feel jealous of me!”

‘To ward off their evil eye’: Andhra farmer puts up Sunny Leone poster to keep crop safe. He says the trick has worked and nobody is looking at his crop now. (@asrao2009)https://t.co/LbeoZzpFNQ

Recently Sunny Leone was in news as an FIR was launched against her, alleging her for ‘promoting pornography’ in south Indian city Chennai. According to Indian media reports, Sunny was visiting the city to take part in a dance event arranged on the outskirts on Saturday, where she has been accused of destroying Indian culture. In the FIR filled by an activist named Emi alias Enoch Moses, stated, “Sunny Leone is promoting pornography that is against the country. It will end our culture and take us to disastrous mode”.

tweet
Share on FacebookShare on TwitterShare on PinterestShare on Reddit
Saman SiddiquiFebruary 16, 2018
the authorSaman Siddiqui
Saman Siddiqui, A freelance journalist with a Master’s Degree in Mass Communication and MS in Peace and Conflict Studies. Associated with the media industry since 2006. Experience in various capacities including Program Host, Researcher, News Producer, Documentary Making, Voice Over, Content Writing Copy Editing, and Blogging, and currently associated with OyeYeah since 2018, working as an Editor.
All posts bySaman Siddiqui