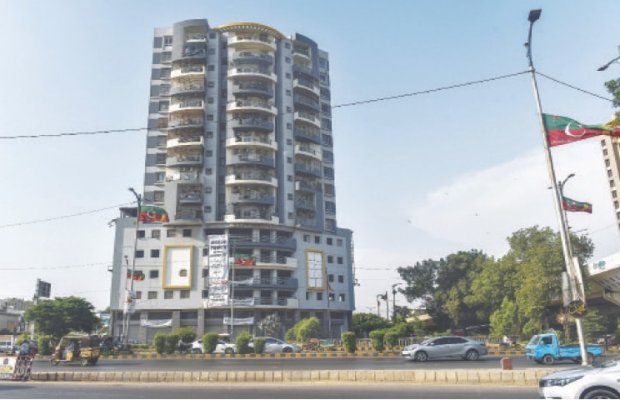 Supreme Court orders the demolition of Karachi’s Nasla Tower in a week!

The Supreme Court ordered the demolition of Nasla Tower, located at the intersection of Shara e Faisal and Shara e Quaideen, in a week.

The court also sought a report from the commissioner Karachi within a week.

During the hearing of the Nasla Tower case, the court ordered the building to be demolished within a week.

The court has directed to use of modern technology to demolish the Nasla Tower and said that the cost would be borne by the owner.

“Why hasn’t the Nasla Tower been demolished yet? Are you waiting for hammers and chisels to do it?” annoyed Chief Justice Gulzar Ahmed inquired from the commissioner of Karachi during the hearing.

“For us, Nasla Tower doesn’t exist,” he said.

“Cut off the water and electricity connections of the tower by October 27,” he added and adjourned the hearing.

The court summoned the Sindh Chief Minister expressing dissatisfaction over the report of the Sindh government in Gujjar, Orangi, and Mahmoodabad canal rehabilitation cases.

The report had mentioned the Financial difficulties.

Shortly afterward, on the orders of the Chief Justice, the Chief Minister reached the court along with Sindh Provincial Ministers and Administrator Karachi Murtaza Wahab.

The Chief Justice said, “Tell me, what is the condition of the city?” People are not getting drinking water. The roads are bad.

CM Sindh Murad Ali Shah said that we have a shortage of officers, four people are working instead of one. The

Chief Justice said that you should not make political statements.

The Sindh Chief Minister said that he was not making a political statement, he was telling the truth.

Justice Ijaz-ul-Hassan said that he was asking for money from Bahria Town for the victims of drains. Who has not come yet?

CM Murad Ali Shah said that this is the money of the people of Sindh, Rs 36 billion is needed for the rehabilitation of the victims, which the federation refused to give, we allocated 100 acres of land, work is not going fast due to financial difficulties.

The court lifted all restraining orders of the Sindh High Court regarding encroachments.

The Anti-Encroachment Cell has been suspended due to stay orders.